Most therapeutic medicines have at least three different names.

Since a 1992 directive of the European Community, the UK has used INNs, when available, as approved names, except in one case—adrenaline. I have previously discussed the reasons in detail; they are related to risk, usage, etymology, and the history of the discovery of adrenaline.

That the adrenal glands contained a substance with dramatic pharmacological effects was first shown in 1893 by George Oliver, a Harrogate physician, and Edward Schäfer, professor of physiology at University College London. However, a name for the substance was not coined until John Jacob Abel in the USA prepared crude adrenal extracts in 1897 and called them epinephrin [sic]. Abel’s paper, presented to the American Physiological Society in 1898 and published in 1899, began “Acting on Hyrtl’s suggestion that epinephris would be the best name for the suprarenal capsule, the author has given the name Epinephrin to the active principle isolated by him.” Nowadays we spell it with an e at the end. Epinephrine is Greek: ἐπί (upon) + νεϕρός (kidney), which in classical Latin becomes ad (placed on) + rēnēs (kidneys). Greek epinephrine = Latin adrenaline. 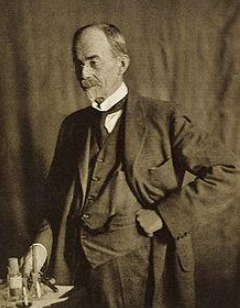 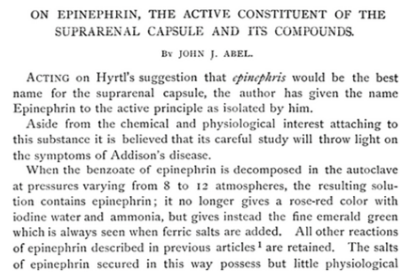 Josef Hyrtl (1810–1894), born in Hungary, studied medicine in Vienna from 1831, became prosector in anatomy in 1833, graduated with a thesis titled Antiquitates anatomicæ rariores, and became professor of anatomy at the University of Prague in 1837, at the age of 26. He was appointed to the chair of anatomy at Vienna in 1845, and in 1850 published his Handbook of Topographic Anatomy, the first textbook of applied anatomy. He was famed as a teacher, and in 1865, the 500th anniversary of the foundation of the university of Vienna, was made rector. Perhaps his best known work was a monograph proposing the reform of anatomical terminology, Onomatologia Anatomica (Wien: Wilhelm Braumuller, 1880), subtitled Geschichte und Kritik der anatomischen Sprache der Gegenwart (History and Critique of Current Anatomical Terminology).

Abel’s epinephrin did not behave physiologically like adrenaline does, and was in fact an inactive benzoylated derivative. In 1901, after having visited Abel, Jokichi Takamine prepared a pure extract of the active principle from the adrenal gland and patented it. Parke, Davis & Co marketed his extract and used the proprietary name Adrenalin. Epinephrine became the generic name in America, on the incorrect assumption that Abel’s extract was the same as Takamine’s. “Epinephrine” later became the rINN.

The first instance of “epinephrine” in the online OED is from 1899, but the citation is to a brief abstract in the “Jrnl Chem Soc”, an annotation by “W. D. H.” of Abel’s paper in “Proc Amer Physiol Soc 1898” titled “On epinephrin, the active constituent of the suprarenal capsule and its compounds” (pictures). The earliest recorded instance of “adrenaline” is from 1893.

J J Abel coined the name “epinephrine”, but in the UK we continue to call it adrenaline.