To begin with, flex your mental muscles. To flex (Latin flectere) means to bend; a flex is easily bent. Reflection is bending back, of objects, light (as in the retinal reflex), and, metaphorically, thoughts. Retroflected means bent backwards, as a uterus may be, and a retroflex sound is one that’s articulated with the tongue curled up and backwards. Inflection is bending in or modulation, and in grammar it refers to the ways in which languages change the endings of words to meet different needs, including conjugation of verbs (varying mood, tense, person, and number) and declension of nouns, adjectives, and pronouns (varying number and gender).

Languages such as Latin, Greek, and Hebrew are highly inflected; others, such as English, French, and German are less so. Thus, different forms of Latin nouns confer nuances of meaning. Take, for example, “medicus”, a doctor. “Medicus” is the basic noun, in the nominative case, or the subjective case, as it’s called in English grammar; “medice” is the vocative (O doctor); “medicum” is the accusative (i.e. objective) case; “medici” is the genitive (possessive, of a doctor), and “medico” is both the dative (to or for a doctor), and the ablative (by, with, or from a doctor); the respective plural forms are medici, medici, medicos, medicorum, medicis, medicis.

One consequence of this is that word order does not matter. In English “Gaius loves Lesbia” is not the same as “Lesbia loves Gaius”, as Catullus well knew (picture). But in Latin the order need not change—inflection does the job: “Gaius Lesbiam amat” and “Gaium Lesbia amat”. 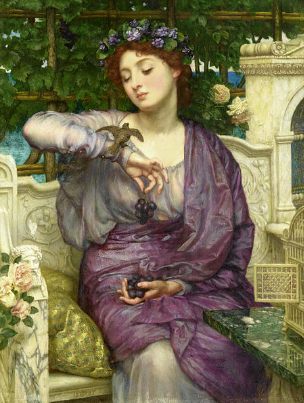 “Lesbia and her Sparrow” (1907) by Sir Edward John Poynter, inspired by a Latin style hendecasyllabic poem of Catullus

Catulli Carmen 2:
Passer deliciae meae puellae
quocum ludere quem in sinu tenere
cui primum digitum dare adpetenti
et acres solet incitare morsus
cum desiderio meo nitenti
carum nescioquid libet iocari
et solaciolum sui doloris
credo ut tum gravis acquiescat ardor
tecum ludere sicut ipsa possem
et tristes animi levare curas
Here is my free hendecasyllabic translation:
Pretty Sparrow, my paramour’s pet plaything,
with whom she toys, holding you to her bosom,
offering one of her fingers to your beak,
provoking you to give her needle-like bites,
while crying her heart out, because missing me,
and making some private joke, so I believe,
to ease her anguish, quenching the fire of love.
If I could only play with you, as she does,
It would alleviate all my heart’s woes too

Another consequence of inflection is that prepositions become highly versatile, changing meaning when they precede different cases. Take the Greek word πᾰρά, which gives the English prefix “para-”. With the accusative case πᾰρά means beside, near, by, alongside, past, or beyond; with the genitive it implies motion in relation to a person or place; and with the dative it implies rest by the side of a person or thing. Unlike Latin, Greek has no ablative.

As an example, consider “paramedical”, in which the prefix “para-” implies “alongside”. The earliest instance I have found is in an issue of The British Medical Journal (21 January 1911), in an article on scientific journals, titled “Literary Notes”. It began with a description of Biologica, subtitled Revue Scientifique de Médecin, “a new monthly periodical devoted to general biology, natural science, anthropology, psychology, hygiene, sociology, comparative pathology, and applied science, . . . the ‘paramedical’ sciences”. The inverted commas around the word “paramedical” in the original suggest that it was a very new term; this instance certainly antedates the earliest citation currently in the Oxford English Dictionary, which is from The Lancet (15 October 1921), in an article titled “Para-medical Research”, referring to “the fringe of several medical problems”, including scientific instruments, food investigation, and oxygen research.

Today’s online version of the OED defines the adjective “paramedical” as “associated with or related to medicine or the medical profession; spec. designating or relating to fields considered to be allied or auxiliary to medicine, such as physiotherapy, social work, etc.; designating or relating to workers in such fields . . . also . . .  emergency medical personnel.” The word was first included in Burchfield’s supplementary volume O–Scz (1982), with a much shorter definition.

A 1952 citation in the OED describes marriage guidance, premarital examinations, eugenic prognosis, birth control, and treatment of infecundity as “para-medical services”. In the 1960s the adjective became a noun—a paramedical, and just as doctors are medics, so paramedicals became paramedics. In the 1970s, reversing the process, the noun paramedic became an adjective. For example, in Time magazine on 9 November 1970 paramedic studies were described as “wide-ranging—from community health to bacteriology and psychosomatic medicine.” By the 1970s “nurses and technicians” were being described as paramedics and by the 1980s so was anyone not medically qualified who might be involved in medical care, such as social workers, teachers, psychotherapists, and clergy; by the 1990s those involved in emergency care were also included. Today paramedics are autonomous clinicians registered with the Health and Care Professions Council, as established by The Health Professions Order (2001).

Incidentally, because members of the Parachute Regiment are called “paras”, or originally “paraboys”, the noun “paramedic” has also been used since the 1960s to mean a medic who parachutes in to give medical aid. So are there paraparamedics—parachuting paramedics?