The rise of Trump has ignited fierce debate about the Goldwater rule, but what, if anything, would a formal diagnosis of Trump tell us? 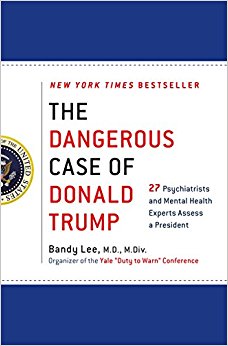 These thorny questions have acquired renewed urgency in the wake of the stunning ascension of a certain flamboyant American politician. More than any person in recent memory, Donald J Trump has ignited fierce debate about the wisdom, or lack thereof, of weighing in on the mental health of public figures.

These questions lurk incessantly in the background of a recent and widely discussed book, The Dangerous Case of Donald Trump: 27 Psychiatrists and Mental Health Experts Assess a President (hereafter TDCDT). This tome pulls together discussions about Trump and the Goldwater rule, which prohibits psychiatrists from commenting on the diagnostic status of public figures they have never personally examined (in cases where they have examined them, they must obtain permission from these figures to do so).

The Goldwater rule emerged from the embers of the bitter 1964 US presidential election, which pitted the Republican candidate Barry Goldwater against Democrat Lyndon Johnson. As the campaign drew to a close, the editor of Fact magazine, Ralph Ginzburg, sent a survey to 12 356 psychiatrists asking for their opinion of Goldwater’s mental health. Of the 2417 who responded, 1189 deemed Goldwater unfit to serve as president. Many referred to Goldwater in derogatory terms: “emotionally unstable,” “immature,” “grossly psychotic,” “paranoid,” and “delusional,” among others. A few likened him to Hitler or Stalin. Others maintained that he suffered from schizophrenia, paranoia, or other disorders. Two years later, Goldwater sued Fact for libel, and was awarded $75 000 in damages. In 1973, the American Psychiatric Association responded to the Goldwater brouhaha by enshrining Section 7.3, now colloquially termed the Goldwater rule, into its ethical canon.

Across TDCDT’s assorted chapters, numerous authors willfully ignore or blatantly flout the Goldwater rule, offering an occasionally engaging but just as frequently bewildering mix of analyses of the psychological sources of Trump’s behaviour, his early emotional development, and his probable diagnostic status.

Surprisingly, few authors challenge the evidentiary basis of the Goldwater rule; several accept uncritically the cornerstone assumption that a direct psychiatric examination is a prerequisite for a valid diagnosis of a public figure. Nevertheless, as we (Lilienfeld, Miller, and Lynam) observed in an article in Perspectives on Psychological Science, the empirical support for this “direct interview assumption” is negligible. Plenty of data not discussed in the book indicate that informant (observer) reports are often more valid than the self-reported data on which direct interviews largely rely; that the addition of direct interview data at times reduces rather than increases validity when plentiful behavioural data are available; that interviewers are typically unable to detect interviewee efforts at impression management; and that valid psychiatric diagnoses can often be made by interviewing people who know the target individual well.

Furthermore, as a few TDCDT authors note, the Goldwater rule may have been sensible in the 1960s, but it is almost surely outdated in the modern era of Twitter and other social media forums, cable television, and the internet, which provide ample data from multiple sources on politicians’ behaviour. Consequently, there are scant scientific grounds for a categorical ban on psychiatrists’ diagnoses from a distance.

But what, if anything, would a formal diagnosis of Trump tell us? Few authors in TDCDT broach this question. Some prominent psychiatrists, such as Allen Frances, argue that we should focus on Trump’s erratic and irresponsible behaviour, not on his psychiatric diagnosis or diagnoses. The latter information, they insist, is a distraction.

Frances is surely correct that many diagnoses impart less insight into politicians’ behaviour than most laypeople assume. At the same time, his critique is overstated. As Samuel Guze and Eli Robins (1970) observed in a classic article, valid diagnoses supply new information not afforded by behaviour alone. Consider narcissistic personality disorder (NPD), the diagnosis most commonly invoked with respect to Trump. Data show that individuals with NPD are often prone to dishonesty; are likely to make positive first impressions that fade over a matter of months; are adept at attaining leadership positions but not at being effective leaders; and rarely change their self-serving behaviour over time. None of this information is immediately apparent from these individuals’ past or current behaviour.

Still, TDCDT reminds us of why, when it comes to speaking out about the mental health of public figures, discretion is typically the better part of valor. Although several chapters offer helpful observations about Trump’s behaviour, many others are highly speculative discourses on the psychodynamic factors supposedly underpinning Trump’s notorious antics. All in all, it seems unlikely that few nonpartisan readers of the book will come away with an especially favourable impression of psychiatry’s scientific status or of psychiatrists’ inferential capacities. Nor is the book likely to change the minds of readers who are positively disposed to or undecided about Trump.

Ironically, perhaps in deference to the spirit of the Goldwater rule, most psychiatrists, including most chapter authors in TDCDT, seem more willing to offer up armchair hypotheses about Trump’s putative psychodynamics, including the hypothesised unconscious forces that drive his behaviour, than to remark on his diagnostic status. Yet after reading TDCDT I’d suggest that they may have it backwards. The most persuasive chapters in the book stick closely to Trump’s observable behaviours and to diagnoses—such as NPD—that can be plausibly derived from them, whereas the least compelling chapters stray far from his behaviours, conjecturing how Trump’s ostensible unconscious conflicts, childhood experiences, or Oedipal relations with his father have shaped his personality makeup.

Should psychiatrists be allowed to comment on the mental health of Trump or other major political figures? Yes, and the Goldwater rule deserves to be retired. But should they? More often than not, no, and they should almost always confine their diagnostic conclusions to those based on observable behaviours, which typically necessitate minimal clinical inference.