The recognition of a new clinical entity, “chronic breathlessness syndrome” has been proposed, following an international Delphi process to achieve an expert consensus.1 Why does this matter and is it a useful idea?

Breathlessness on exertion is a feature of a normal healthy life, but undue breathlessness is also a common symptom, affecting around 10% of the population2. The major contributors are set out in the Breathing SPACE approach developed by The London Respiratory Network—Smoking, Pulmonary disease, Anxiety, Cardiac disease and Exercise/fitness level3. 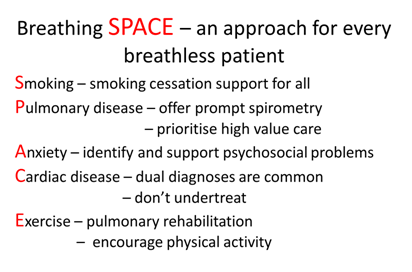 The agreed term, “chronic breathlessness syndrome”, is defined as “breathlessness that persists despite optimal treatment of the underlying pathophysiology and that results in disability”. The purpose of the syndrome is to acknowledge that there is a large swathe of patients who remain symptomatic despite optimal treatment. There are several potential benefits from this. The most obvious is that naming the problem helps to identify and focus attention on this group and ensure that research and resources are directed at addressing their needs. Advocacy is easier if the problem is clearly defined. Effective non-pharmacological and pharmacological evidence-based interventions for chronic breathlessness exist—handheld fans, low dose morphine, and psychological approaches, but they are generally underused.

A second relates to the definition itself. Many people with chronic lung disease are breathless not despite optimal treatment but because optimal treatment has not been delivered. Data from the Royal College of Physicians COPD audit show that only 35% of patients with limiting breathlessness (MRC dyspnoea score of 3-5)  had ever been referred for pulmonary rehabilitation and only 11% of smokers with COPD had been offered quit smoking treatment in the preceding year.4

Lung disease affects one in five people in the UK with 550,000 new diagnoses per year and an estimated direct NHS cost of £9.9 billion/year.5 6 The research spend lags significantly behind the human cost. Late diagnosis is a major problem as breathlessness is misattributed to “normal ageing”, signs of bronchitis as a harmless “smoker’s cough”7. Breathlessness can be an invisible problem as people withdraw from social activities. Social support is an important issue for people who are chronically breathless. The British Lung Foundations runs Breathe Easy groups to provide support for patients and careers. They have an average of 6,000 regular attendees each year and an overall membership of 17,000.  A large number but a small fraction of the 1.3 million people in the UK with a diagnosis of COPD.

Recognition of chronic breathlessness syndrome as a discrete entity may be an important step in acknowledging the scale of the problem and addressing the unmet needs of patients with heart and lung disease.