The IndoEuropean root from which the word “science” eventually descends is SEK, or in an extended form SKEI, meaning to cut.

In Greek σχίζειν meant to split or rend, giving us schism, schist, schizoid, and schizophrenia.

The hypothetical Germanic derivative skaith gave the word sheath, which was regarded as a split stick, so fashioned as to receive the blade of a sword. A skiff cuts through the water. A sheave or shive was a fragment or splinter and a shiv or chiv is a knife, said by some to be from Romany, but not included in George Borrow’s Romano Lavo-Lil. In Scots Gaelic sgian is a knife and sgian dhubh is a black or hidden knife; a skene-dhu or skean-dhu is a small dagger carried by Highlanders, and is nowadays worn as an ornament stuck into the top of the stocking worn with a kilt. There is an old tradition that a skene-dhu should not be given as a present, since the donor may be blamed if it is used in an act of violence—the recipient is therefore required to pay a token amount in return. Other knives include scythes and sickles.

Skis were originally made, so the legend has it, by an Ostyak god, Tunk-Pox, who cut a magic tree into two to fashion a pair of snowshoes (picture). 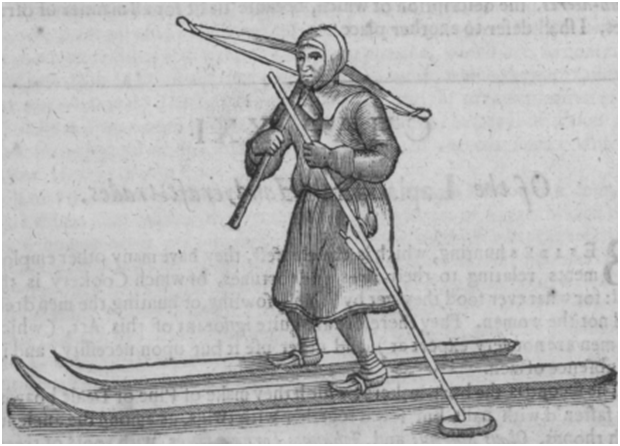 A Laplander on skis, as illustrated in the English edition of The History of Lapland (Oxford, 1674; XX: 98–100) by John Scheffer, Professor of Law and Rhetoric in Uppsala. “I come now to their other instruments relating to this sport [i.e. hunting], the chiefest of which are their shoes, with which they slide over the frozen snow, being made of broad planks extremely smooth; the Northern people call them Skider, and by contraction Skier (which agrees something with the Germans Scheitter, that is, cleft wood and sometimes Andrer or Ondrur or Skidh).”

Scindere, to split asunder, to cleave or tear apart The abscissa on a graph, short for abscissa linea, is a line that is cut off by the ordinate. Originally, the ordinate was any of a series of chords perpendicular to, and bisected by, the axis of symmetry of a conic section and the abscissa was the portion of a conic section lying between its points of intersection with two parallel ordinates. In an ellipse with a horizontal diameter, the ordinates are vertical lines perpendicular to the diameter with the abscissa at right angles. Hence Cartesian coordinates.

Scissors cut things up and scission is the act of cutting, the breaking of a chemical bond, or the breaking up of the atomic nucleus as it undergoes fission. Then we have scind, abscind and discind, to divide, cut off, separate, or detach; exscind, to cut out or excise; interscind, to cut in two; prescind, to cut off prematurely or abruptly; proscind, to tear, berate, or reproach; and rescind, to revoke, cancel, or repeal.

Secare, to cut with a knife, cut the throat, decapitate, castrate, incise surgically, traverse Section is an act of cutting or dividing. Conic sections are mathematical constructions derived by cutting through a cone. Sections of documents are separate parts cut off from each other, and if you section a patient you cause them to be compulsorily detained in a psychiatric hospital under the relevant section of the Mental Health Acts of 1983 and 2007, incidentally, as it happens, cutting them off from society. Sex differentiates men and women, cutting them off from each other. A secant is a line that cuts across a circle and also a derived trigonometrical relation; a sector is an area contained by two radii and the arc of a circle or ellipse. To bisect is to cut into two equal parts; disect is an obsolete word meaning to separate by cutting, while to dissect is to cut up a body, typically in order to display its parts. Secateurs prune your roses. Other actions that involve cutting include intersection, transection, venesection, and vivisection. An insect (“animal insectum”) is an animal whose body is divided into segments.

Scribes originally scratched letters into hard surfaces, such as stone or wood, or into wax, clay, or papyrus. We don’t have scribes any more, just scribblers.

Scire, to know in various senses The present participle of the verb scire was sciens, and scientia was knowledge, cutting through ignorance. An Old English text by Ælfric contrasts sapientia, wisdom, with scientia, knowledge, and the word “science” first appeared in the middle of the 18th century. “Scientist” was coined by William Whewell in 1834, reviewing a book called On the Connexion of the Physical Sciences by Mrs. Somerville in the Quarterly Review. The “ingenious gentleman” to whom Whewell referred in his article (picture) was actually himself. 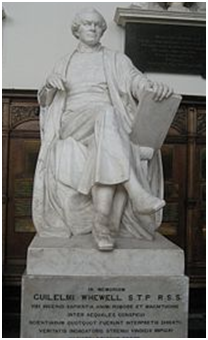 A statue of William Whewell (1794–1866) in the chapel in Trinity College, Cambridge, of which he was a student and later master. “[There is no] name by which we can designate the students of the knowledge of the material world collectively. We are informed that this difficulty was felt very oppressively by the members of the British Association for the Advancement of Science, at their meetings … in the last three summers. … Philosophers was felt to be too wide and too lofty a term …; savans was rather assuming, besides being French instead of English; some ingenious gentleman proposed that, by analogy with artist, they might form scientist, and added that there could be no scruple in making free with this termination when we have such words as sciolist, economist, and atheist—but this was not generally palatable; … it was not easy to discover an English equivalent for [the German] natur-forscher.” (From Whewell W. “On the Connexion of the Physical Sciences. By Mrs. Somerville”. Quarterly Review 1834; 51(101): 54-68.)

Skill, from the same IndoEuropean root, originally meant the power of discriminating one thing from another and hence the ability to reason. Later it came to mean practical knowledge combined with ability, cleverness, or expertise, and therefore an ability to do something.

Which makes it unsurprising that there is certainly skill in science.