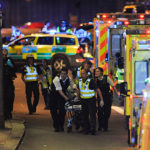 Being exposed to traumatic events can damage your mental health. However, the most common outcome is resilience, as most people caught up in terrorist incidents do not develop mental health disorders such as post-traumatic stress disorder (PTSD). Although many experience short term distress manifesting as anxiety, poor sleep or concentration, intrusive thoughts or dreams, and a desire to avoid reminders of the incident—these are not mental disorders.

Not everyone reacts the same way. For example, those directly involved in terrible incidents by chance, such as those injured, bereaved, or direct witnesses to incidents have higher rates of subsequent problems than, for example, first responders. The best estimate for PTSD in those directly involved in the 2005 London bombs is around 30%. [1] However, only 4% of London Ambulance Service staff responding to the same incident reported symptoms suggestive of probable PTSD; a rate similar to that found within the general UK population. [2] On the other hand, whilst 30% of a random sample of ordinary Londoners not directly involved reported significant trauma-related symptoms in the days after the bombings, this figure declined to 11% six months later, which is within population ranges for common mental disorders. [3]

Following the 7 July attacks, fears and anxieties among the general public were largely managed by people turning to their already existing social networks. Only 1% thought they might need professional help. [4] This tendency to speak with people we trust, at a time and place of our own choosing, rather than race to speak with mental health professionals, is a consistent theme within trauma studies. This is as true for the general public as it is for people working in higher risk jobs. [5] There is good evidence that for most people social support from family, friends, colleagues, or other members of their social network, is associated with good mental health.

The importance of our loved ones during a crisis shines through in other ways, too. Evidence suggests that when disaster strikes, people are often more concerned about loved ones than themselves. Being unable to contact loved ones post incident is associated with higher anxiety, not just in the short term, but also up to six months later. [6] Helping people make swift contact is an important part of reducing both the short term, but also long term impact of these traumas. This is now recognised throughout emergency planning, from the availability of mobile phones and chargers at emergency rest centres to the ability to “check in” on social media to tell others that you are safe.

Are there any risks in the wall-to-wall coverage that naturally accompanies such events?  First, suggesting that this be restricted is a policy initiative that might have been designed by King Canute. It isn’t going to happen. As it is, mainstream media organisations already exercise a considerable degree of self-censorship when it comes to disturbing images. Nevertheless, research has shown a correlation between hours watched and emotional distress; [7] this is particularly true for children. Correlation of course does not equal causation; we should not “blame” the media for the impact of terrible events. Nevertheless, whilst it is not sensible for parents to deny children access to the news or pretend that nothing has happened when it clearly has, gently suggesting when enough is enough is appropriate.

So, whilst many people are understandably distressed by traumatic events, we must remember that being upset is not a mental health problem and does not require treatment. [8] The time for mental health professionals becoming involved is when the minority who do develop mental health disorders seek help, or after a screen and treat programme, such as was successful implemented after the 2005 bombings, [9] identifies them as being unwell. [1] We should not forget the important role that community figures; general practitioners, vicars, imams, military padres, teachers and so on, can play after horrific incidents in lending a trusted listening ear to those who chose to speak with them.

And we should also remember that we have been here before. The guidance given about the critical importance of immediate practical support for the survivors and injured during the 1940-1945 Blitz remains apposite: “the morale of the bombed largely depends on the care they get in the first 36 hours…rest centres, facilities for children, information, healthcare and provision of food.” [10]

Simon Wessely, President of the Royal College of Psychiatrists.

Neil Greenberg, lead for veteran and military mental health at the Royal College of Psychiatrists.

Funding source: The research was funded by the National Institute for Health Research Health Protection Research Unit (NIHR HPRU) in Emergency Preparedness and Response at King’s College London in partnership with Public Health England (PHE). The views expressed are those of the author(s) and not necessarily those of the NHS, the NIHR, the Department of Health or Public Health England. The funding body did not play a role in the design, collection, analysis or interpretation of data; the writing of the manuscript; or the decision to submit the manuscript for publication.