This is a debate about the merits of regulation versus a system without any control, says Nick Clegg 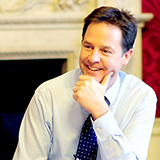 In 1926, an American trade unionist, William Roberts, gave evidence on the effects of alcohol prohibition to the Senate Judiciary Committee:

“Everywhere we went there was plenty of distilled liquor, but seldom real beer. We found that the homes of the people had been turned into breweries and distilleries which turned out dangerous decoctions that if drunk to any extent would ruin the health of those who drank them. When asked why they drank such stuff they said there was nothing else to be obtained, and they invariably asked when were Members of Congress going to realize that the manufacture and sale of beer would make for true temperance.”

Far from controlling and eliminating alcohol use, the “noble experiment” of prohibition drove users towards increasingly potent and dangerous drinks. With no regulatory levers in place except the threat of arrest (which had to be set against the promise of handsome profits for those who defied the law), there was no effective way to control the market. The ensuing public health crisis was one of the key motivations behind the repeal of prohibition in 1933, when President Roosevelt signed a new law allowing the sale of beer with a maximum alcohol content of 4%.

For spirits in 1926, read “skunk” in 2017. [1] “Skunk” is a direct result of prohibition. New cultivation methods have pushed up potency over the past 20 years. Just as 1920s-era bootleggers didn’t bother to produce and smuggle high volume, low alcohol beer, so the illicit cannabis industry has responded to criminal enforcement by developing products that maximise profit, with no consideration for the health of its customers.

That last point is crucial. In the pursuit of maximum tetrahydrocannabinol (THC) content, an unfortunate consequence has been to breed a protective component, cannabidiol (CBD), out of the plant. CBD may mitigate many of the negative heath effects of THC, from anxiety and paranoia to the risk of dependency.

The impact of this re-engineering of cannabis has only recently become apparent. A 2015 study in south London found that “skunk” was a factor in a quarter of patients with first-episode psychosis; people smoking lower-potency hash showed no increased risk.

Skunk is now sold without any effective restriction to about two million UK consumers a year, including large numbers of children. As with prohibition-era users of illicit alcohol, people use it because there is no alternative: the market is saturated by a high-strength product associated with severe mental health problems. And prohibition may deter people with drug use disorders from seeking the help they need.

Politicians typically respond with a shrug of the shoulders. Instead of looking for real solutions, they expect us to believe that the criminal law will prevail, despite no evidence that this approach has ever worked anywhere in the world.

This is irresponsible and unimaginative. But there is an alternative, as the United States found in 1933: legalise and regulate the milder forms of the drug.

Regulation would allow us to control the product, capping maximum strength and requiring that all varieties contain CBD. Labelling requirements would end the lottery where cannabis users have no idea what they are buying. Sales from licensed outlets would be taxed, capturing £1bn a year which is currently lost to organised crime.

Regulation would also allow us to apply the lessons learned from the control of tobacco and alcohol. The risks of unfettered commercialisation are real, but instead of allowing the industry to establish itself and then rein it in, we would impose strict rules from the start. Plain packaging for all cannabis products and a ban on advertising would prevent manufacturers from stimulating demand. Users could be nudged away from smoking and towards vaping, as we have done with tobacco. Vendors could finally be properly policed, with licenses withdrawn for selling to under-18s as we do with pubs.  And some of the tax revenue could be used to support clearer public health messaging.

Unlike the Conservative and Labour election manifestos, which make no mention of the cannabis problem, the Liberal Democrat manifesto includes a clear commitment to regulate the market. We believe that regulation would reduce crime and improve public health. We have studied the legal markets that already exist in North America, and have accepted the recommendations of a panel of experts, including former and serving chief constables.

We are not arguing to “liberalise” drug laws: cannabis of unknown content and potency is already available to any adults and children who want it. This is a debate about the merits of regulation versus a system without any control. The opponents of regulation should ask themselves this: what other public health problem do we contract out entirely to organised criminals?

Nick Clegg is a Liberal Democrat politician who served as deputy prime minister in the coalition government from 2010 to 2015 and as leader of the Liberal Democrats from 2007 to 2015. Until the General Election was called he was member of parliament for Sheffield Hallam, where he was first elected in 2005. He has a long standing interest in drug policy reform and is a member of the Global Commission on Drug Policy.

[1] “Skunk” in the recent scientific literature is a term used to describe cannabis which contains a high percentage of Tetrahydrocannabinol (THC, an intoxicant) but little to no Cannabidiol (CBD, an antipsychotic).