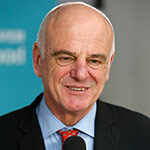 Next Tuesday, health leaders from across the world will elect the new leader of the World Health Organization (WHO). With variable climates, war, and changing lifestyles putting pressure on health, this election could not come at a more critical time.

The WHO must be there to help with these challenges, but to do it effectively, it needs an upgrade and as Director General I will deliver the much needed reforms.

In my career I’ve worked as a clinician in many countries and have always viewed a career as a doctor as an absolute privilege. It is a profession that offers the ultimate satisfaction—being able to help someone who is ill to recover and get back to living a life.

That is why I work for the better health of people, communities, and nations. Throughout my career I have traversed a huge range of complex and technical health challenges.

I worked in Iraq where I almost lost my hearing in the 2003 bombing of the UN headquarters; in Sierra Leone where I was the UN Special Envoy on Ebola when levels of sickness were doubling every three weeks; and in Indonesia where I led WHO’s response to the effects of the devastating 2004 Indian Ocean Tsunami.

These experiences have allowed me to broaden my view past diagnosis and treatment, to focus on the reasons underpinning ill health and sickness.

In my work on climate change, for example, I have seen the way the geographical range of disease vectors like Aedes aegypti has broadened. I have seen, through supporting the implementation of the Sustainable Development Goals, how health is inextricably linked to development.

I have also worked in global health and the multilateral system long enough to build a very strong, clear, image of how the WHO should operate.

First and foremost, WHO must change the way it manages health emergencies, as a matter of urgency. I have led the response to outbreaks like malaria, avian influenza, and cholera—so I know what is required. I have seen first-hand the scale of suffering if the response is not effective. The UN Secretary-General asked me to advise on what needed to change after the Ebola response and I delivered—but it is clear that the WHO is still not ready for another Ebola, and that must change.

I am the best person to deliver that change.

The WHO must also do more to close the gap in health inequalities that persist across the world. It is simply unacceptable that individuals continue to die from things we know how to treat, or know how to prevent. These inequalities are often linked to where someone is born, their age, gender, ethnicity, or religion. WHO must demonstrate an unequivocal commitment to the realization of human rights and to leaving no one behind through its pursuit of universal health coverage. It must ensure that health policies put people first and enable people everywhere to look forward to a healthier and more equitable future.

A key element to this work is improving the effectiveness, affordability, and availability of medicines. Working alongside organisations like GAVI, governments can help ensure the most vulnerable, particularly children in impoverished communities, are immunized against killer diseases like Yellow Fever.

The WHO must work with countries, scientists, and the pharmaceutical industry to support cutting edge innovation, ensuring that vaccines, drugs, and other products are affordable and accessible to all of those who need them. This can include tiered pricing, market entry premiums, and increasing efforts to get rid of counterfeit medicines.

We must also help countries and governments to make sure that their health systems are properly skilled and staffed. Health workers and governments throughout the world turn to the WHO for advice, standards, and guidance, so the organization must be managed, financed, and staffed in ways that maintain trust and credibility. The WHO must be the lead agency for health—beyond dispute. Communicating clearly what needs to be done and where.

Non-Communicable Diseases (NCDs) account for the greatest number of premature deaths worldwide and given the fact that most are preventable or treatable, this is not good enough. These conditions put a massive strain on health systems across the world, and these are not problems limited to the developed world. There must be a much greater focus on this area, and I will champion efforts to tackle NCDs.

Along with this there are the health threats we’ve not yet felt the full force of. Unless immediate action is taken, antimicrobial resistance will become a much bigger issue in the coming decades. Climate change and air pollution also present a growing and potentially devastating threat to human health.

I have worked in global health for over 40 years, from roles in senior leadership, to working as a clinician, and as an educator. I know how to lead in the multilateral system, I know the issues at a local level, and I understand the science that must underpin decisions.

That is why I am in this race. I think the WHO must change, and I am the right person to deliver that change.

David Nabarro is one of three final candidates for Director General of the World Health Organization (WHO). He has worked as a doctor, educator, and international civil servant in global health for over 40 years, across more than 50 countries.  Find out more at www.davidnabarro.info