Bangladeshis love to sing, dance, make music, recite poetry, talk, eat, and let off steam. So icddr,b day, the day of what may be the largest  health research institution in a low income country, centres on performance—on a stage erected in the car park. And the two highlights of the day were performances of two very different members of the Bangladeshi Parliament—one the Honourable Abul Maal Mulith, the minister of finance who is in his 80s, and the other the Honourable Momotaz Begom, one of Bangladesh’s most popular singers who performed with her band of tabla, traditional drummer, trumpet, Bengali flute, electric guitar, bass, keyboards, and one more drummer for impact. 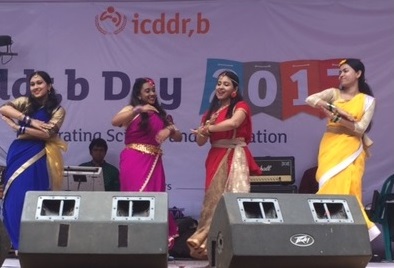 The two births of icddr,b

The minister of finance played a key part in the two births of icddr,b, which was formerly the International Centre for Diarrhoeal Disease Research, Bangladesh. The first birth was in the 1960s when the Cholera Research Laboratory was created under the wing of the South East Asia Treaty Organisation (SEATO) when Bangladesh was East Pakistan. Bangladesh was an obvious place to create the laboratory as cholera was and is endemic in the country, but there were also cold war overtones.

The minister was in charge of protocol and organised the opening. In 1962 the Cholera Research Laboratory opened the Dhaka Hospital, which everybody in Dhaka knows as the Cholera Hospital, and which provides free treatment and manages as many as a thousand people a day during the two peaks of diarrhoea, which occur before and after the monsoon. The team that manages the hospital knows more about treating cholera than any other team in the world and has provided emergency teams for epidemics across the world.

icddr,b is best known for having developed oral rehydration therapy, the standard treatment for severe diarrhoea. The treatment was not fully tested when the War of Liberation began in 1971, but, the minister explained, doctors from the Cholera Research Laboratory, many of them Americans from John Hopkins, used the treatments in the refugee camps that opened in India and saved thousands of lives.

The Cholera Research Laboratory also set up an office in Washington to lobby on behalf of what was to become Bangladesh. (For those who don’t know, the War of Liberation was when Bangladesh freed itself from West Pakistan in a brutal war that killed millions.) The minister was in Washington at the time and described how the office was one of the most effective lobby organisations ever. The American media and many within the State Department, congress, and the senate (most famously Edward Kennedy) were appalled by the war, which was precipitated by West Pakistan being unable to accept that the Bangladeshis had won a democratic election; but West Pakistan was supported by what the minister called “those two scoundrels”—Richard Nixon and Henry Kissinger.

The support provided by the Cholera Research Laboratory was not forgotten when a move began to convert the Cholera Research Laboratory to the International Centre for Diarrhoeal Disease, Bangladesh. Something had to happen because Bangladesh became a non-aligned nation and so left SEATO, which was now anyway, the minister explained, a weak organisation. A fair few Bangladeshi politicians opposed the new organisation on the grounds that it was a remnant of “Yankee imperialism” or that doctors there would be paid more than other doctors. But the minister and the then president supported the organisation, and, the minister explained, one prominent opponent dropped his opposition on the condition that the name included Bangladesh, which wasn’t the original intention.

Having delivered his masterful, extempore speech, which was so different from the usual banal speech by politicians, the minister, as the chief guest of the day, moved out into the courtyard to cut the cake and launch the cultural programme. Bangladesh seems to me the most colourful nation on earth, with all the women dressed in bright colours and balloons, flowers, and pictures everywhere. The edges of the courtyard were filled with stands showing in imaginative ways the scientific work of the different divisions of icddr,b. Most popular I noticed was the dart board in the Division of Maternal and Neonatal Heath. I couldn’t get close enough to see the point of the dart board.

The cake was the largest I’d ever seen, more than a metre square, and was covered in white icing with the name and logo of the day iced on the cake. Just as happens at Bangladeshi weddings, the minister cut the cake and then fed some to the executive director, who ended up with his trousers frosted with icing. Then the minister and the executive director released a flag labelled with the day into the sky pulled by helium filled balloons.

I then sat back and watched the employees of the centre perform. The standard was high: people sang, danced, recited poetry, told stories, and performed a sketch that everybody found hilarious in which a man from Sylhet mocked the accents of a man from Chittagong and vice versa: a Bangladeshi version, it was explained to me, of a joke with a Scotsman and Englishman. 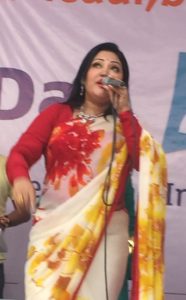 The excitement mounted as we waited for Momotaz. She normally charges 2 million Taka (about £20 000) a performance but was performing for free because of how the hospital provides services to the very poorest of people. Her formidable band assembled, and eventually Momotaz appeared, an elegant woman in a colourful and what looked like a most expensive sari. She was more queenly than pop star, emanating great calm while her band became ever more frantic. She sings Bengali folk songs, but I can’t imagine that traditional singers have such impressive backing. Effortlessly, she whipped her adoring audience into a frenzy, and eventually I found myself dancing in a writhing group ( a “mosh pit,” I was told)—the only white haired man in the throng.

Momotaz wasn’t elected as a member of parliament but appointed because of her popularity and support for women and the poor. I was left thinking that perhaps we should have some members of parliament in Britain who were elected not through the ballot but because the people adored them. Maybe then parliament would be more appreciated.

Competing interest: RS is the chair of the board of trustees of icddr,b.