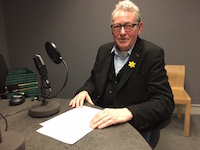 This speech was delivered as a TED Talk for University of Liverpool. Finsbury Square, London. 29th March 2017.

This has not been an easy time for me. My 13 year old has been making his GCSE subject choices at school and has chosen PE over history. It has brought back vivid memories of my choices at the same age. First between history and chemistry, then later between arts and science. My passion was social history and especially the politics. I managed to keep up history by studying it after school. In the sixth form, my headmaster had the last word. “If you can do the sciences, you should,” he told me. “You can return to the humanities later. You can’t move the other way round.” He was right!

The next watershed was my application to university. My mother had me down for a vet from the moment I passed the 11+. My uncle John had other ideas. “You should do medicine,” he told me with authority, “for three reasons: Firstly—it is well rewarded and prestigious. Secondly—it is a passport to the world. And thirdly—because you don’t need to decide what you really want to do for another five years.” He was right on all three counts.

Years later, having qualified as a doctor and specialised in psychiatry, family medicine, and sexual health, I found myself on the MPH at the London School of Hygiene and Tropical Medicine listening to lecturer Sidney Chave talking about social history, politics, and public health. I knew that I had come home. Home  to a place where all that had gone before would make sense.

And at the London School, I discovered that public health was about more than food and water, housing, drains, and epidemics—important and interesting as these were. It was about poverty and inequality and the fight for social justice. It was also about the contribution of a wide range of people to public health with multi-disciplinary teams deploying technical skills and the arts of advocacy on a journey of improvement in the human condition. It was about war and peace, economics and security, and touched on every aspect of everyday life. Above all I discovered that public health was the political wing of medicine and of the environmental and social sciences, and that Parliament was its dispensary.

Forty years on I look back on my own small span of social history and how it has impacted on public health. As a 1947 baby boomer, I was part of the post-war demographic wave that swept all before it. We had benefited from war time solidarity with equality of rationing and the best nourished cohort of pregnant mothers ever, and now we benefited from a remarkable post-war settlement. The generation that had grown up and lived through the pre-war years of recession and austerity, had fought fascism and seen family and friends perish for freedom, were determined to build a better, secure, and peaceful future for their children.

Here, in the UK, we benefited from the advent of the National Health Service and the welfare state, the miracle of universal immunisation and the demise of many fatal childhood illnesses so well known to our parents. But it didn’t stop there. They created the United Nations, the World Health Organization and the UN’s other Agencies and in Europe, the European Union—all institutions to act as bulwarks against poverty, disease, hatred, war, and death. They were all public health initiatives.

The opening up of educational opportunity meant that millions of us from humble backgrounds could aspire to university and dream big; I have had a wonderful life and career. I have been privileged to play a part in many of the contemporary public health issues and dramas of the times from alcohol and drugs to the sexual revolution, HIV, and Ebola. I have seen frontline action in public health disasters and emergencies. I have met Presidents, sovereigns, and celebrities; enjoyed a comfortable standard of living and travelled the world. I can take satisfaction from having made a difference in some ways. At its best public health work is amazing, with never a dull moment, thinking on your feet and responding to new challenges. As I am fond of telling my students “it’s the most fun you can have with your clothes on!”

But I am restless and ill at ease. I am still not sure what I really want to do. Uncle John wasn’t quite right on this point. What I do know is that the world is in trouble and that the implications for the public’s health are immense.

Last summer I joined a group of walkers with Sir Anthony Seldon, vice-chancellor of Buckingham University to make a pilgrimage along the Western Front of World War 1, from Switzerland to the English Channel. Our ambition was to pave the way to international recognition of this secular pilgrim path as a permanent reminder of the horror and futility of war. Day after day we made our way along tracks, through woods and villages and past the relics that marked the deaths of millions of men from around the world.

Our walking was punctuated by cemeteries, stories, solemn moments, and tears as we reflected on the causes of the carnage; the last hours and days of a generation of young men.

On the morning of 23rd June we woke to the news that the British had voted to leave the European Union.  We were all in shock. There, in France, immersed in the practical reality of the implications for peace in Europe and the world, we could not believe what had just happened. With events in the Ukraine, in Turkey,  across the Mediterranean and beyond, the fracture lines that lay behind the events of 1914, were only too visible again. The EU was one possible bastion against history repeating itself.

Throughout the summer the Syrian refugee crisis continued to play out with old fears of the foreigner and of the “other” surfacing as though they had never gone away; racism and xenophobia bubbling away in a dozen national cauldrons. And then in November, America did the unthinkable. It elected as President a reckless, insular, and provocative man with no understanding of the world’s fragile human and natural ecology. Public health is once again in peril.

Against a background of global warming, and denial of the overwhelming weight of scientific opinion, it seems that we are in a lemming rush to self destruction. Hatred and war are once again the greatest immediate dangers to health and the quality of life. In the 17th century military deaths accounted for 19 out of every million deaths. By the 20th century this had risen to 183. In the 21st century the prospects look bleak, especially as these statistics don’t give the full picture. Seventy five percent of casualties are now civilians, compared with 10% in World War 1. And in the train of conflict and war, of mass movements of refugees, comes mass death from the classical public health causes of starvation, squalor, and epidemic disease, and with it a long trail of psychological trauma, misery, human trafficking and slavery, and further violence.

If this all seems bleak we should take comfort from the track record of humans fighting back against all the odds. In this there is a tradition of public health workers playing an active part. Credentials in public health can be a ticket to being heard. Throughout my career I have got up every morning wishing to change the world. I have been inspired by many who have gone before. Not least among these was my late friend and colleague Slobodan Laing, medical officer of health for Zagreb. At the height of the disintegration of Yugoslavia, Slobodan stood between Serbian troops and striking miners in mediation. He went on to have a key humanitarian role throughout the Balkans civil war. His inspiration gave me the courage to intervene on behalf of the innocent at Hillsborough, with President Clinton to evacuate medical refugees from Kosovo, and to bring the fuel protesters to their senses here in the UK.

At this stage in my career, one of the things I really want is to encourage many more committed people to find their passion in the protection of public health by following in Slobodan’s footsteps. There is plenty to do and the task is urgent. As the last of the noble wartime generation that gave us hope and opportunity passes on, it is time for the boomers who benefited to ensure that the torch of solidarity, peace, and public health is passed on to the millennials. That we see off the threat of small minded cynics and xenophobics  who have recently been in the ascendancy.

I invite you all to join in this crucial work.

“It must be born in mind that the tragedy of life doesn’t lie in not reaching your goal,
The tragedy lies in not having any goal to reach.
It isn’t a calamity to die with dreams unfulfilled, but it is a calamity not to dream…..
It is not a disaster to be unable to capture your ideal, but it is a disaster to have no ideal to capture.
It is not a disgrace to reach for the stars, but it is a disgrace to have no stars to reach for. Not failure, but low aim is the sin.”

And I know that my young son who will enjoy his PE still has time to discover a passion for history.

Postscript: My uncle, John Ashton, was Edward Heath’s right hand man in the Department of Agriculture during the Brussels negotiations leading us to joining the Common Market. He flew with the Fleet Air Arm in the second world war, and dedicated his career to post-war reconstruction through agriculture and was the first professor of agricultural economics. This piece is dedicated to uncle John and his selfless generation.

Conflict of interest: John Ashton is a specialist adviser to the House of Commons Health Select Committee on Brexit. He voted to Remain in the European Union on 23rd June 2016. His uncle John Ashton was one of Edward Heath’s principle negotiators for entry into the Common Market.