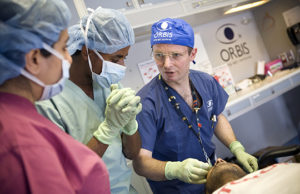 Tsenduren lives a nomadic life in Mongolia. He thought he was in his 70s and arrived at the Orbis Flying Eye hospital in his traditional clothes, having never visited the city before and having never seen an aircraft before. His failing vision had meant he felt a burden to his family and his greatest wish was to be able to ride a horse again. The smile on his face after successful cataract surgery is something I will never forget and reminded me once more how important the work we do at Orbis is.

I first became aware of Orbis when I saw their stand at an anaesthesia conference. I gave my details, but really didn’t think much more of it other than a flying hospital was cool. A few months later I got a call from the London Office saying that they needed a paediatric anaesthetist for a programme in a couple of weeks and could I help? I said yes and have never stopped saying yes since! When I got the opportunity to work part time as a “staff anaesthesiologist” on the Flying Eye Hospital, I jumped at it. And when in 2014 I was offered the post of global medical director for the organisation, it just seemed to be the right thing to do so I joined Orbis full time.

Orbis started work in 1982 under the premise that doctors in low and middle income countries lacked access to high quality training. While you can take people to train in other countries, what is needed is to be able to train them in their health system environment. A way to bridge this gap was to take a flying teaching hospital to them, and so the Flying Eye Hospital was born.

The first plane was an elderly DC8 and it made its first mission on 1 March 1982. We have now just launched our third generation Flying Eye Hospital—this time in a converted MD10 aircraft—and over the years we have visited over 78 countries and conducted 296 training and service delivery programs in 163 cities.

In the 1990s we realised that in order to have more impact we required a longer on the ground presence, and so we opened our first country office in Ethiopia. We now have 13 country and fundraising offices around the world, which coordinate and run multi-year projects aimed at training healthcare professionals and health system strengthening. Yet the Flying Eye Hospital remains at the core of our training programmes. The plane in particular allows us to demonstrate best practice and to work with partners to improve their facilities. The amazing technology on the plane not only allows us to provide high quality education to the audience on the plane, but to also use video conferencing to audiences both in and out of the country where we are working. The Flying Eye Hospital has even achieved full US hospital accreditation with AAAASFI—the first time a non-ground based facility has ever achieved this.

It is hard for us to imagine in the UK that so many people in the world just accept blindness from cataracts as natural aging. In the UK we take access to healthcare for granted and we know that if we develop cataracts or other eye diseases we will be treated. In low and middle income countries this is simply not the case. 285 million people are estimated to be visually impaired worldwide: 39 million are blind, and 246 million have low vision. About 90% of visually impaired people in the world live in low income settings, and 80% of this is treatable. A third just need a 15 minute cataract operation.

I believe passionately in the Orbis approach that the way to tackle this is by training all the cadres of healthcare staff that are needed and engaging in health system strengthening to provide a safe, quality environment for them to work in.

I have enjoyed every mission I have been on: they are all different, with diverse challenges. After all these years I still get a buzz of excitement every time I go to the plane, and every time I step on board I still look at the hospital and think this shouldn’t be possible.

One memory that stands out was in Cameroon. I was revisiting a hospital, which had faced many challenges when I first went there, after a gap of six months. I was met by the director of the hospital on my first day and he literally reduced me to tears when he took my round the operating theatres that they had completely refurbished based on my recommendations.

Perhaps the most overwhelming memories are because by working with local people you get to really see the world through other people’s eyes. It is an amazing experience to understand the challenges and barriers to healthcare delivery in other countries and to feel that you have contributed to change.

Jonathan Lord is the Orbis Global Medical Director and previously staff and volunteer anaesthetist with the charity.