I first set foot in Tanzania 20 years ago as a medical student. Rather ambitiously at the time, I came with the intention of conducting an evaluation in Tanzania and the UK of the UNICEF Baby Friendly Initiative, which aimed to promote and facilitate breastfeeding. That work led to an editorial in The BMJ, which focused on how well this initiative had been adopted in the UK, as the UK had the stronger culture of bottle feeding at the time.

We argued that these three improvements would be key to UNICEF’s initiative reaching its full potential: developing the primary care aspects of the initiative so that there was greater support and continuity in the community for mothers, coordinating with other key agencies, and securing government led support.

This year, two decades later, I returned to Tanzania still looking at child and public health, but now with a focus on how to improve eye health. Blindness or low vision in childhood can lead to developmental delay, school non-attendance, and has lifelong implications for a child’s physical and financial independence, as well as having a huge impact on their family and the community. In Tanzania the prevalence of blindness in children is estimated to be 0.8/1000 children, with half of these cases thought to be due to avoidable causes. Some conditions, such as retinoblastoma, are life threatening. Yet children often present late with conditions such as cataract, vitamin A deficiency, and sight threatening conjunctivitis.

The Integrated Management of Childhood Illness (IMCI) was developed and launched by the World Health Organization (WHO) and UNICEF in 1995. It then evolved in 2003 to include neonatal care and became IMNCI. The purpose was to move away from vertical programmes, and quite simply to promote child health and integrate treatment and care for key childhood illnesses, thereby reducing mortality and morbidity. Over 100 countries have adopted IMNCI to varying degrees, with its three central components, which are 1) improving health workers’ skills, 2) health systems strengthening, and 3) improving family and community practices.

A study conducted in Tanzania during the phase-in period of IMCI in 2000 showed that child mortality rates were lower and that the strategy was good value for money. A Cochrane review published this year concluded that IMCI and IMNCI may reduce childhood and neonatal mortality, but that its effects on nutritional status, vaccine coverage, maternal care seeking behaviour, and the number of women who exclusively breastfeed are mixed, uncertain, or may have little to no effect.

There is one important aspect of child health missing from IMNCI and that is eye health. The approach neglects to mention training health workers on eye conditions and makes no recommendations on screening or treatment protocols for eye conditions.

In 2002 the WHO developed a set of 10 basic key activities for primary care workers to help them promote, treat, and refer eye conditions in children (see poster below). This included specific management, such as giving antibiotics to newborns to prevent conjunctivitis, and ways to prevent eye conditions developing, such as vitamin A supplementation and measles vaccination. 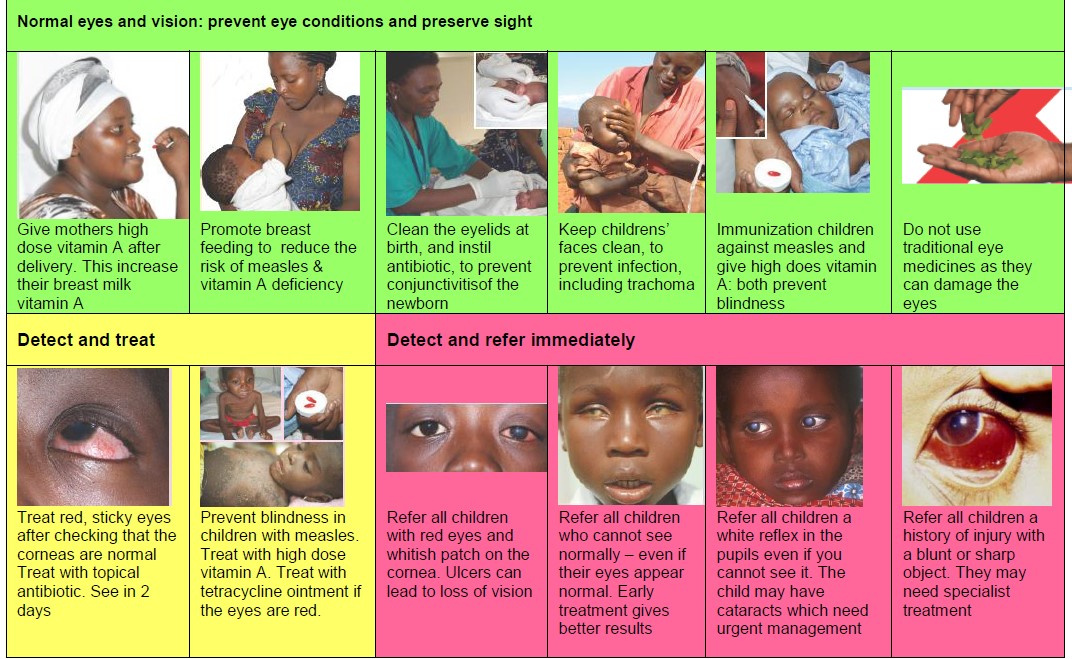 A study conducted in Tanzania showed that teaching reproductive and child health workers these steps improved their knowledge and behaviour. The 10 activities are simple but can have a huge impact on the child who is treated and diagnosed—whose condition would probably otherwise have been missed.

Children’s eye health is an essential component of the WHO’s VISION 2020 global plan to reduce avoidable blindness. However, without greater integration of children’s eye health into mainstream children’s health programmes, and an emphasis of the importance of primary care in prevention, health promotion and early detection, treatment and referral as appropriate, this will not be possible. It feels like I’ve come full circle in my work, and, just as 20 years ago I advocated for more training and support within community or primary care, better coordination with other child health programmes, and government led support, I found those same principles still remain as crucial to improving child health in Tanzania.

Aeesha NJ Malik is an ophthalmology registrar currently based in London with a specialist interest in global health. She is a policy adviser in the All Party Parliamentary Working Group on Global Health.

Competing interests: I have read and understood BMJ policy on declaration of interests and declare the following interests: I was partially funded by the charity Sightsavers to visit Tanzania to meet and work with the research team who have worked on the pilot study on training health workers in children’s eye health