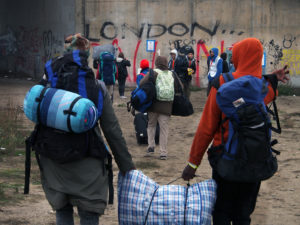 For most of 2016, whenever one of us visited the Médecins Sans Frontières (MSF) project in the refugee settlement in Calais, France, we would find new fences, new walls, and new areas where trees were cut down to allow police surveillance of residents. Surrounded by barriers on all sides, “The Jungle”—the name for this migrant camp located near a main port for crossing the English Channel into the UK—is built on a former industrial waste site. It is no place to live.

Last month’s dismantlement of the 6000-plus person camp began relatively calmly, although thousands of residents had simply fled before authorities began the process of moving them to temporary “reception centers” around France. When the eviction started, the general mood ranged from relief, particularly among those who hoped to settle in France, and resignation or anger among others who still hoped to join relatives or friends in the UK.

But the situation quickly devolved. Much of the camp was burnt to the ground, and many had to avoid the fires to find someplace in the camp to sleep. Official plans had called for unaccompanied minors to remain in Calais while their family reunification claims were considered, but processing stopped after the designated 1500-person shelter filled—leaving dozens of teenagers to sleep in the Jungle or on the streets exposed to violence, noise, and fires that burned through the nights. Official assessments of who qualified as an unaccompanied adolescent were done hastily based only on appearance, despite promises by French and English authorities to use established screening protocols; consequently, some were sent to reception centers as adults. 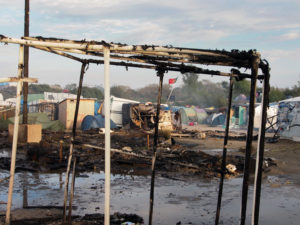 Even in better times the Jungle was a makeshift shantytown of tarps, tents, and mud, alternately smelling of food cooked on open fires and tear gas used by French police to keep refugees inside the camp. Yet, as bad as it was, it provided residents with a semblance of security and community. Seeing now the smoke and burnt remains, we fear what comes next for the migrants.

Since April 2015, MSF has had psychologists, psychiatrists, social workers, and translators working in the Calais Jungle and following up patients hospitalized nearby. Together with the British NGO Refugee Youth Service, we also ran a camp youth center that served as a safe space where minors could meet with a lawyer, physician, psychologist, or educator, or just play games and do activities. It offered listening and respect as a way to help young people restore their identity and confidence.

Through these contact points, our mental health professionals witnessed intense psychological stress among the refugees. Many were in despair after the chaos of fleeing war and/or deprivation at home, separation from family and community, harrowing journeys to reach the Jungle, and then crushing disappointment as Calais turned into a dead end rather than the gateway to a brighter future. Some struggled to contain traumatic memories, pain of multiple losses, crippling fear of being sent back to the situations that drove them to flee, or physical and psychological wounds sustained during their perilous journeys. A survey conducted in Calais by Epicentre in late 2015 found that 66% of participants experienced at least one violent event while in transit or after arrival in the Jungle, usually due to altercations with other migrants, smugglers, or police. Wounds and injuries from these clashes were common. Once in Calais, some died trying to reach the UK (almost 40 in the last 18 months), including minors stuck in the long, bureaucratic process towards reunification with family in the UK.  Most migrants’ stress levels are not pathological, but rather a “normal” reaction to chronic, extreme emotional strain. Yet for some, persistent distress develops into debilitating anxiety or deep depression requiring continued support from a mental health professional, and sometimes medication.

Once plans to dismantle the Jungle were announced, we tried to support our most vulnerable patients by advocating that they be sent to reception centers where follow-up mental health services would be available. We continue to make referrals and to provide medical certification, follow-up support and short-term medication at their new sites. But we’re concerned about their long-term care: although the Jungle doesn’t exist anymore, former residents’ psychosocial needs remain acute. This is particularly true for unaccompanied minors, who may now be separated from the tenuous networks they formed in the Jungle. As one boy at the MSF youth center said just prior to the Jungle’s dismantlement, “If I cannot go with my friend, I will kill myself.” Minors who remain in the camp awaiting processing also need continued follow-up, plus suitable facilities to accept and care for them. Reunification for those with family ties in the UK should remain a priority, along with translation services.

The demolition of the Calais Jungle has not eliminated the needs of its former residents or prevented desperate people from establishing new tent settlements, like those now appearing on the outskirts of Paris. Ultimately, the cure to the migrants’ plight will not come from psychologists but from a political solution. Now, as always, we must focus on the migrants’ humanity and right to protection, and to restoring their dignity after this latest chaotic chapter in their quest for safety, security, and hope.

Frédérique Drogoul, MD, is a psychiatrist working as the Mental Health Advisor at Médecins Sans Frontières in Paris.

Samuel Hanryon is a communications officer at Médecins Sans Frontières in Paris and was present during the demotion of the Jungle in Calais.