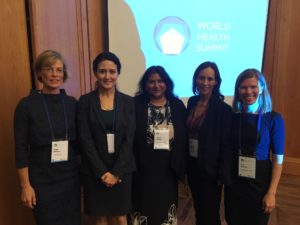 “The first principle of health is life. War is a direct threat to life. For millions of people worldwide, surviving war is the predominant objective in their daily existence. Ending war would be the first step toward health and wellbeing in any sense of these ideal conditions.”

One of the most important global health challenges we all face is the effect of conflict on health. Wars and persecution have displaced more people from their homes—a total of 65.3 million at the end of 2015—than at any time since UNHCR records began. Much of this displacement has come from conflicts that cause large refugee outflows that international communities struggle to deal with, including the current humanitarian crisis facing migrants across the Mediterranean. So far this year, 2500 migrants are estimated to have died trying to cross the Mediterranean.

Although conflict between nations has reduced over the last forty years, protracted civil wars such as those in South Sudan and Central African Republic continue and the scale of destruction and numbers of casualties and deaths has increased. For these countries, though rich in natural resources, basic infrastructure and health provision is seemingly impossible as any development is set back by violence and destruction. Ongoing civil war prohibits the training and retention of health professionals and the population’s health needs are largely unmet, served, where possible, chiefly by international organisations and the humanitarian sector. Life expectancy for men and women is 50 years in the Central African Republic and two thirds of the population live on less than $2 a day. These countries need peace, stability and an environment permissive of investment and development in order to recover and rebuild infrastructure. There is good evidence that the longer peace and stability lasts, the less likely further conflict is to ensue.

BMJ Case Reports, the Institute of Strategic Studies, and the International Committee of the Red Cross co-hosted a workshop which focused on the human cost of conflict, the danger to healthcare personnel and healthcare infrastructure in conflict zones, and the mitigation of driving and sustaining factors of conflict, in order to promote stability and development to protect some of the world’s most vulnerable communities.

Virginia Comolli examined the landscape of conflicts across the world, describing patterns in modern conflict, conflict hybridisation, the funding of conflict and terror through criminality, including the drugs trade. Anke Hoeffler further expanded on the funding of conflict through oil revenue and natural resources that could, ironically, fund development and pay for universal health coverage in these countries. She showed how civil war is development in reverse, setting economies back, on average, 14 years, this, too, only if conflict does not recur—all too common in fragile nations.

The scale of population displacement and the movement of people fleeing conflict as refugees has been widely discussed. Separated from their homes, their families, and their livelihoods, people often face no other choice than to fall into the hands of traffickers and smugglers and embark on perilous journeys that have seen adults and children abused and traumatised. Most refugees remain in neighbouring regions, where social services are strained, or are not able to flee across borders. In Syria alone the number of internally displaced children is estimated to be over 1 million. Children who remain lack access to education or health services. Vaccination rates in Syria have fallen from 80% to 41% leaving diseases like polio and measles to re-emerge as public health threats.

For populations affected by war, the flight of health personnel and destruction of health infrastructure is a real threat. Injuries and burns require expert medical treatment and consume essential resources. The lack of availability of medications affects not just the injured, but people with chronic diseases such as diabetes. The ongoing threats to medical neutrality and consequences of the shrinking humanitarian space have left people desperately in need of access to healthcare. As the HealthCare in Danger programme outlines the threats to healthcare personnel, attacks on clinics, hospitals, and ambulances and, alarmingly, the recent criminalisation of medical service provision are clear breaches of international humanitarian law. Prohibiting or blocking the access of the wounded, the sick and civilians to healthcare is against the Geneva Convention.

While we speak of the number of people killed and injured in attacks, the number of people killed indirectly in conflict is far greater. Most of these deaths are related to disease compounded by appalling living conditions. We need to be reminded that these figures represent people with personalities, professions, and plans. For many, their daily existence is without the most basic of amenities like water or electricity. They live with the constant fear of injury or death, and the sense of loss and grief. Upholding the right of people to live with dignity and human rights requires a co-ordinated humanitarian response on a scale hitherto unprecedented.

In 2015, the world spent on $1676 billion on war. As we count the human and financial costs of conflict, we ask, how many nations could ensure universal access to healthcare with a budget of that magnitude? Only by coming together can we discuss these issues central to health and life for all of us.

Seema Biswas is the editor in chief of BMJ Case reports.
Virginia Comolli Senior Fellow for Security and Development, The International Institute for Strategic Studies.
Anke Hoeffler is a Research Officer at the Centre for the Study of African Economies (CSAE) at the University of Oxford.
Katri Bertram is Head of Advocacy and Policy at Save the Children.
Esperanza Martinez is the International Committee of the Red Cross’s Head of Health.