Many celebrities, including Olympic athletes, such as US swimmer Michael Phelps, and actors, such as Gwyneth Paltrow and Jennifer Aniston, are fashionably subjecting themselves to cupping. So, is “the silliest celebrity health fad ever” effective for treating anything? Well, despite all the attendant gobbledegook, or more likely reflected by it, the answer is clear: no.

Today cupping is mostly associated with medical practices in the Far East, typically China and Korea, but it has a long pedigree in many other countries. Here, for instance, is a description of an episode in the life of King Charles II in 1685:

With a cry he fell. Dr. King, who, unfortunately, happened to be present, bled him with a pocket-knife. Fourteen physicians were quickly in attendance. They bled him more thoroughly; they scarified and cupped him; they shaved and blistered his head; they gave him an emetic, a clyster, and two pills. During the next eight days they “threw in” fifty-seven separate drugs; and, towards the end, a cordial containing forty more. This availing nothing, they tried Goa stone, which was a calculus obtained from a species of Indian goat; and as a final remedy, the distillate of human skull.

The King graciously apologized for being “an unconscionable time a-dying” but did at last.

In Eastern medicine cupping is partly based on ideas about channelling the life force qi. The mechanistic theory that encouraged cupping in Western medicine was that of the four humours, blood, phlegm, [yellow] bile, and black bile. Imbalances in the humours could be remedied—excess blood, for example, by bloodletting. Removal of blood, or of blister fluid produced by cupping or the application of blistering agents such as cantharides, was also a way of removing what Dryden called “noxious humours that infect the blood”. Emetics and cathartics had supposedly similar effects. Some foods and medicines were supposed to counteract ill humours; wine, for example, was regarded as an antidote to excess phlegm. In An Essay on the Shaking Palsy (1817) James Parkinson described treating a patient with “rheumatic affection of the deltoid muscle” by cupping, hot fomentations, blistering, sweating with antimonials, and calomel to evacuate the bowels, all with the same purpose.

Cupping (“dry cupping”) increases local blood flow, and so cupping can be used for bloodletting (“wet cupping”; picture). First scarify the skin, then apply a heated glass cup. The hot air in the cup cools and creates negative pressure, causing blood to flow. Alternatively, raise a blood-filled blister and pierce it. There are many different methods.

Cupping has been recommended for a myriad of indications, including pain relief, many types of infections, facial paralysis, Behçet’s disease, acute gout, chloasma, urticaria, and snakebite. Can anything that purports to treat so many problems be effective for any of them?

Cupping is not entirely safe. Adverse reactions have included anemia, panniculitis, herpesvirus infection, abscesses, post-inflammatory hyperpigmentation and keloid, burns, and a Koebner effect. Cupping may also exacerbate eczema. Cupping of the cervical area has been associated with hemorrhagic stroke, attributed to an acute rise in blood pressure, and rupture of a dissecting vertebral artery.

The Indo-European root KEU meant a bend or a curve and hence a rise or a hollow. Add p and you get cup and cupola (Latin cupa, a tub or barrel). Add m and you get kymograph (Greek κῦμα, a swelling or wave). Add l and you get koilonychia (Greek κοῖλος, a hollow). Add d and you get codeine (Greek κώδεια, a poppy capsule). Well at least we know that codeine is a pain killer, even if cupping isn’t, and codeine isn’t on the World Anti-Doping Agency’s 2016 list of prohibited drugs in sports.

Edzard Ernst, author of an umbrella systematic review of trials, has said that “there is no good evidence that cupping helps any condition—except the dreaded condition of celebrities craving attention.” Perhaps the Olympic athletes have forgotten that winners at the Games are awarded medals, not cups. 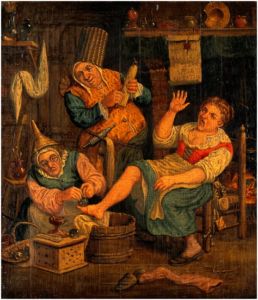 A woman and her assistant cupping a patient. Oil painting on wood, after Cornelis Dusart, 17th C. Reproduced with permission from the Wellcome Library, London. No. 45021i . Creative Commons Licence CC BY 4.0.

Thanks to Kamal Mahtani for the suggestion.