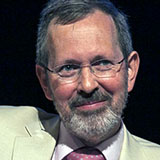 This autumn the National Theatre’s repertoire will include a musical about cancer. Be honest. What is your first reaction? Revulsion at the poor taste of those involved? Despair that the theatre hasn’t got anything better to do? Or a sense of relief that a serious topic is about to be stripped of its mythology?

I am in the last camp. But then my perspective might be deemed somewhat peculiar. I have had prostate cancer since 2010 and three years ago it was declared to be incurable. Along the way I have acquired an interest in how health professionals communicate with patients about serious illnesses—and how this might be done better. To me improving communication must start with addressing our use of metaphor in discussions of disease and working towards professionals and patients using a common language when they communicate.

Let me illustrate that last point by citing some terms often used by oncologists when discussing cancer treatments with their patients:

Cancer Survivor
What we hear: somebody cured of cancer
What they mean: somebody still breathing five years after diagnosis. [And so I am a Cancer Survivor.   Doesn’t feel like that.]

In Remission
What we hear: not cured, but the cancer won’t be around for a good while
What they mean: we can’t see evidence of cancer in your body today

Benign Tumour
What we hear: it isn’t good news but it won’t kill me
What they mean: you have a mass of tissues that are growing out of control. But they are not capable of metastasis (qv)

Metastasis
What we hear: I don’t really know, but it is very bad news
What they mean: Your tumour is capable of spreading systemically through your body and not just to adjacent tissues. If it has already performed this trick then this is bad news

Incurable
What we hear: terminal
What they mean: we can’t cure it. But depending on the grade and type, we might be able to keep it at bay for a long time

Terminal
What we hear: curtains
What they mean: curtains within six months

Palliative
What we hear: prelude to curtains; they are just going to plump up my pillow and give me Lucozade and morphine
What they mean: it is curtains but we will still offer to treat you, in some cases with big bazookas

Do these misunderstandings hamper patient care? Well, not if the doctor closes the gap by explaining what he or she means. Or better still, avoids the more slippery terms altogether. And I agree that some of the differences in meaning might seem modest. But put yourself in the patient’s place and those shades of meaning become much, much more important. And, of course, the terms are often used in combination, which only confuses matters further. I, for example, might be described as a cancer survivor with malignant, metastatic tumours. Perhaps it is time for a new, shared language of cancer?

The development of that language, securely founded in shared meanings, would be a good first step towards better communication between professionals and patients. It would not, of course, deliver the goal of full participation in decision making, but that goal will remain elusive unless we begin by understanding one another.

Andrew McDonald is the author of “A long and winding road. Improving communication with patients in the NHS“ (Marie Curie, 2016).  The National Theatre’s production of  “A pacifist’s guide to the war on cancer“ runs from 14 October to 29 November. Andrew will be appearing in a platform discussion of the show on 24 November at the National Theatre.