Anglo-Saxon spelling was consistent, but when Old English and French collided after the Norman conquest of England in 1066, inconsistencies in English spelling arose that lasted until the printing press and dictionaries gradually forced greater regularity, if not always rationality. Samuel Johnson, in his influential dictionary of 1755, preferred the etymologically incorrect variant -our for many words that ended -or in the original Latin. Both forms (and others, such as -oure, -eur, -ore, and -owre) had been used in English before. In some cases his spelling has survived (colour, honour), in others it hasn’t (errour, inferiour).

But when the American lexicographer Noah Webster—whose first dictionary, A Compendious Dictionary of the English Language, appeared in 1806—embarked on a mission to remove superfluous letters from words, he removed the u from words ending in -our (color, honor), restoring the etymologically correct Latin forms. These variants became standard in America.

Because part of Webster’s agenda was to make American and British orthography distinct, just to be different, he also changed the final -re in words such as centre and theatre to -er (center, theater), even though the original etymology (Latin centrum, theatrum) didn’t support such spellings. In fact, although the earliest recorded forms of these words, in the 14th century, were “theatre” and “centre”, some 16th and 17th century English authors, including Shakespeare, used the alternative spellings, “theater” and “center”, which were dropped in the early 18th century. So Webster seems merely to have revived them. Other examples include liter, meter, titer, and luster. But British English has exceptions, such as member and monster (Latin membrum, monstrum). Spelling and etymology do not always concur.

In the pair “goitre” (British spelling) and “goiter” (US spelling), it is the latter that follows the etymology. The word comes from the Latin “guttur”, which meant the throat and its passages, and sometimes a swelling in the throat. It eventually derives from the IndoEuropean root GUET, a curve, and is connected through variants with other medical terms, including decubitus and antecubital (from GUEB), cod (the scrotum; from GUED), colliculus (from GUEL), and gyrus (from GUER).

I found three papers in which both spellings were used in the same title. Two featured both the French term “goitre plongeant” and the English translation “[plunging or intrathoracic] goiter”. The third demonstrated that a search for “goitre” and not also “goiter” would have missed some papers, although this seems to have been corrected since then—“goitre” and “goiter” now yield the same numbers of hits on PubMed.

Searching for text words gives a different result (picture), with a worldwide ratio of “goiter[tw]” to “goitre[tw]” of over eleven to one. Perhaps this is something to do with the country in which the journal is published and not the country of origin of the authors. 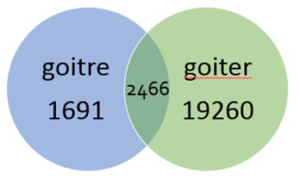