My teenage patient presents with a cough, fever, and a sore throat. This sounds like an ordinary, everyday consultation in general practice. The only difference is that this time the consultation is taking place in a caravan, in the refugee camp (also known as the Jungle) in Calais.

My father and I (GP and GP Trainee) went to Calais to volunteer for one week in April. We were working with a group of nurses, doctors, paramedics, and allied health professionals from the UK and Ireland.

The refugee camp in Calais is home to between 4000 and 6000 undocumented, displaced people. People who have fled war, poverty, famine, and risk of death in Afghanistan, Pakistan, Iraq, Iran, Egypt, Sudan, Ethiopia, Eritrea, and other countries. Innocent people who are seeking a safe refuge. The teenage boy I treat is one of the lucky ones. He has made it to Calais. His father was killed by the Taliban in Afghanistan because he translated for the allied forces. He has siblings but he hasn’t seen or heard from them for over two years. He has no idea where his mother is. He was left with three options: join the Taliban, flee, or live in daily fear. He started walking.

He has crossed the borders from Afghanistan to France mostly by foot without a passport or papers. Fleeing from the trauma he left behind, he faced the constant threat of border violence, trafficking, deportation, and starvation.

He was just like any other teenage boy. He was kind, courteous, respectful, and most of all full of hope. On examination he had signs and symptoms of a viral upper respiratory tract infection. We treated him as we would treat him at home—with simple over the counter remedies and reassurance. 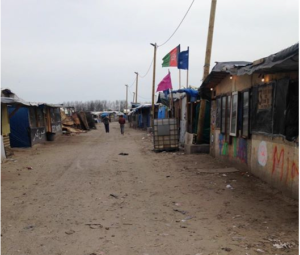 He told me a typical day for him begins at midday. He and 10 of his fellow Afghans wake up in their shared tent. During our time in Calais it was rainy and four degrees, with a bitter north wind. They walk together down the road to the communal showers. They queue for a ticket and they are allocated six minutes in the shower. If they go over this time the water is cut off. They collect their breakfast bags, consisting of a bread roll and carton of milk, at a roadside stall on their walk back to the camp.

For the rest of the day he can walk freely around the camp, play football with his friends, and chat to avoid the intoxicating boredom that permeates the camp.

When darkness comes the game begins. They walk out of the camp, past the riot police, and head for the motorway. Throughout the hours of darkness they play a lethal game of catch with the police as they try to jump onto passing trucks heading for the Channel Tunnel—and ultimately to the UK. The aim is to get on top of the truck, under the truck, in the truck, or behind the cab.

He recounts stories of some of his friends getting through and making it to the UK to join family and friends. However, the vast majority are unsuccessful and end up back in the camp. Some have been hurt (by falling from a truck or being injured by police) and some have even died.

The game is played every night regardless of weather or season. This is the routine for months on end. There is no way home now. If he is forced to return to Afghanistan he is likely to face death. 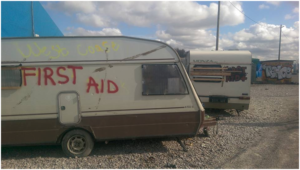 The queue outside the caravan is now getting very long. He is collecting his paracetamol and Strepsils. On the way out the door he shyly asks can he show us one more thing. He shows us a horrific abrasion and extensive bruising of his thigh, which had been caused two nights previously by a rubber bullet from the police. He had been unable to walk or leave his tent for two days. We clean the wound and dress it. We say goodbye, he shakes our hand, thanks us, and sincerely bids us good day. He leaves us with a feeling of deep despair and shame at the injustice of the system that can allow a young boy to be subjected to such dehumanising treatment.

Similar consultations happened 50 times every day during our time in Calais. Horrific war wounds, such as stabbings, bullet wounds, and traumatic limb amputations were clearly evident on many patients. The complaints we were presented with were primarily coughs, colds, lacerations, sprains, fractures, and depression—but in a very resource limited setting and with a very traumatised patient population.

People are facing dreadful conditions in these camps. The strength, courage, resilience, and kindness we witnessed was incredible. To be able to respond to and provide for the basic health needs of this vulnerable population was a deeply humbling experience. The primary care service that is being provided by the Refugee Support and First Aid Team and other medical volunteers is an important part of the humanitarian response and we can all contribute to it.

Rosanna O’ Keeffe is an Irish junior doctor, just finishing the first year of the North Dublin Inner City GP Scheme. She has been to Calais volunteering twice over the past few months.