Of the different types of surname origins, patronymics are the most common.

A patronym or patronymic (Greek πατήρ father + ὀνομα name) is a name that derives from the first name of your father, or more generally from that of a forebear. Originally, people’s names took the forms that we see in the Bible, like David, son of Jesse. Later, these were converted into surnames. In Iceland true patronymics are still used. Leifur’s son Eirik is Eirik Leifsson, Eirik’s son Harald is Harald Eiriksson, and so on. Daughters take their fathers’ names too, but with the suffix -dottir (for example, Gudrun Haraldsdottir), and women keep their surname after marriage. In Tajikistan, people are called by their first name followed by their father’s first name, a true patronymic; in Hungary the order is reversed.

Elsewhere, the original first name of an ancestor becomes a family name from generation to generation. For instance, families descended from someone called Paul may have surnames such as Paul, Powell, or Pauli. Medical examples of this include Albright’s syndrome (Albert), Bartter’s syndrome (Bertram), Benedict’s solution, Franklin’s disease, Gilbert’s syndrome, Howell–Jolly bodies (Hywel), the angle of Louis, Ludwig’s angina, and Tietze’s syndrome (Terry). Alternatively, you can add a possessive, such as the s in Bence-Jones protein and Williams’ sign.

Names that come from a female ancestor are called metronymics or matronymics (Greek μήτηρ mother, Latin mater). There are several metronymic Jewish names, such as Baskin (after Basya), Dworkin (Deborah, Hebrew D’vora), Rifkin or Rifkind (Rifka), and Süsskind (Ziska); each has as a suffix the German word kind, a child. 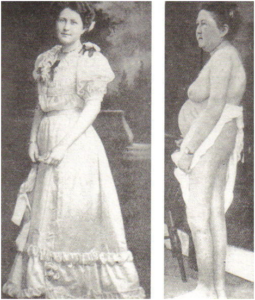 Occasionally a name comes from a more general term for a relative. Cushing, of the disease and syndrome (see picture), is from cousin, which originally meant any kinsman.

Patronymics are commonly formed by adding to the original name the suffix “son” or a prefix or suffix meaning “son of”. The following examples are UK varieties of this.

The bastard sons of English and Irish nobles have sometimes been given the patronymic Fitz, from the French fils, a son (Latin filius). Thus, Fitzgerald, Fitzherbert, Fitzroy, Fitzwilliam. If the name Fitz . . .

O’ is an Irish patronymic, standing for grandson or descendant of, as in O’Brien, O’Connell, and O’Murphy. Medical examples include O’Beirne’s sphincter, O’Dwyer’s tube, and O’Hara’s forceps.

Mac, Mc, and M’ are Scots and Irish patronymics, prefixed to the name (MacWilliam, McDonald, M’Callum). Mac is sometimes prefixed to other words to indicate Scottish connections; for example, BBC Scotland is sometimes called MacBeeb. The introduction of Macintosh computers (Mac an Taoiseach, Gaelic, = son of the chief) led to pieces of software such as MacWrite and MacPaint. In the Isle of Man, names that once began with Mac have been shortened to begin with C, K, or Q. For example, the Manx name Qualtrough is a shortened form of MacWalter. Medical Macs include McArdle’s disease, McBurney’s point, McCarthy’s reflexes, and McGoon’s technique. The M’Naghten rules govern criminal responsibility in mental illness. And the Milroy of Milroy’s disease is a corruption of McIlroy, from Mac Giolla Rua (Irish Gaelic), son of a red haired boy.

The McDonald Hamburger Company, under Ray Kroc, introduced the Big Mac in 1969 and later other derivatives, such as McNuggets and McMuffin. This in turn has led to the pejorative use of the prefix Mc to describe things that you think are cheap and nasty or of mass appeal, such as McPolicies and McThrillers. Self-help books have been called McTherapy. The Washington Post in 1985 described “quick care centers” as “McDoctors” and the New York Times in 1982 described the newspaper USA Today as “journalistic junk food, or ‘McPaper’.” Not a usage that could be applied to The BMJ.