The news that certain companies have been charging over the odds for non-branded pharmaceutical products is not surprising, given activities in this market elsewhere.

Last year the US rights to Daraprim, which contains pyrimethamine, used to treat toxoplasmosis and malaria, were acquired by Turing Pharmaceuticals, who raised the price of a tablet from $13.50 to $750, a 55 fold increase. The price had previously been increased from $1 by Impax, from whom Turing acquired it for about $55m. Martin Shkreli, the then chief executive of Turing, claimed that his company needed the money in order to invest in research on better treatments for toxoplasmosis. Impax have sued Turing for breach of contract (Case 1:16-cv-03241). In the UK, according to the current print issue of the British National Formulary (BNF), Daraprim is marketed by GSK at £13 for 30 tablets (43 pence each).

Other similar cases have been reported. For example, the price of cycloserine, used to treat drug-resistant tuberculosis, was reportedly increased from $500 for 30 tablets to $10,800 after it had been acquired by Rodelis Therapeutics, a 22-fold increase. Scott Spencer, the general manager of Rodelis, reportedly justified this by claiming that the company needed to invest to make sure that the supply of the drug remained reliable. He also said that the company provided the drug free to certain needy patients.

The recent UK problem arises from an anomaly in the methods whereby drug prices are calculated—the drug tariff.

The word “tariff” has its origin in a Semitic root, ‘rp, which meant to know or reckon. In Arabic ‘arrafa, to announce or inform, gave ta‘rif, notification. The turned comma in these transliterations represents the letter ayin, technically a voiced pharyngeal fricative, too subtle a sound for those who are not native speakers of the language to mimic. In Hebrew a tariff is ta‘areef, ﬨﬠﬧיִףּ; the second letter [from the right], the one that looks like a Y, is the ayin. A tariff was originally an arithmetical table or ready reckoner, an official list or schedule of customs duties, a list of rates, or the whole system of such duties or rates. It then came to mean a classified list or scale of charges made in private or public businesses.

The UK drugs tariff has three categories, A, C, and M, as follows:

A problem arises when branded medicines in category C, in which prices are capped, go off patent, when they can be moved to category A, in which the prices are not capped. Products in category A have to be marketed as non-branded products, which supposedly increases competition, driving prices down. However, if Category A drugs are little used, there may be no competition and anyone who markets them can charge what they want.

To illustrate the extent of the price changes that have resulted from this anomaly in the UK, I have looked out the prices of doxepin, one of the drugs that was mentioned in recent newspaper reports, as published in the print version of the BNF since the first issue was published in 1981. They are shown in the Table below. The prices listed in the bottom line of the table may be underestimates of prices that are being charged for doxepin, according to recent newspaper reports. Other drugs have been similarly affected. They include carbimazole, clonazepam, hydrocortisone, liothyronine, olsalazine, primidone, and trifluoperazine. This loophole in the drug tariff law needs to be amended.

Anyone who is tempted to buy any of these drugs cheaper over the Internet would be well advised not to. The quality of medicines bought in that way is not guaranteed and they may be counterfeit. The medicines you receive may not contain the active compound. They may contain the wrong dose or the wrong drug. You may not even receive them at all. 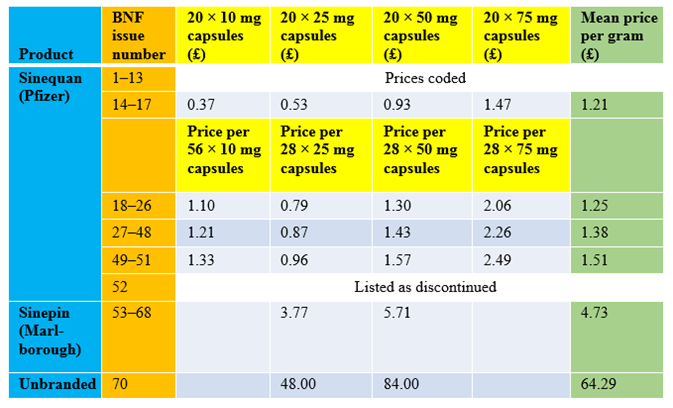 Table: Changing prices of doxepin, as listed in print issues of the BNF