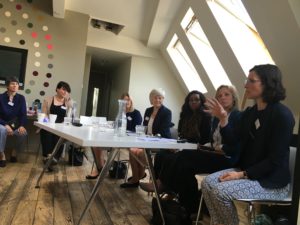 It is 20 years since a TV documentary showed a British prisoner give birth while handcuffed to a prison guard. Anyone who remembers the images must be asking why a charter for improving the care of pregnant women in prison and their babies has just been launched. Surely this doesn’t happen anymore?

According to Birth Companions—the charity set up in the wake of the 1996 programme—many pregnant women and new mothers in prison still do not get the care and support they are entitled to.

The Birth Charter, which was launched in London on Thursday 26 May, draws on the experience of the staff and team of volunteers at Birth Companions, who have championed the rights of vulnerable women during pregnancy, labour, and the postnatal period through more than 1500 births.

In February, the Prime Minister David Cameron called for an urgent rethink of the way the prison system in England and Wales treats pregnant women and mothers with babies. It was “absolutely terrible” he said, to think of infants spending time behind bars. A review would look at alternatives to custodial sentences, such as electronic tagging, for pregnant offenders, said Cameron, although he admitted that for some mothers and babies there was no alternative to prison.

With Helen Titchener, from the radio soap opera The Archers giving birth in prison this week, public interest in the care for women in custody has never been higher.

“For us the stars have aligned,” said Naomi Delap (pictured, far right of photo above), director of Birth Companions, at the launch of the charter. “We have public interest in the situation of pregnant women and new mothers in prison, and political will to address the needs of perinatal women affected by the criminal justice system.”

The charter’s 15 recommendations spell out the care that all pregnant women in prison should have, including the same standard of antenatal care as women in the community, being able to attend antenatal classes, being housed and fed for their health, being told whether they have a place on a mother and baby unit, being accompanied to hospital by officers who have appropriate training, being supported in their chosen method of infant feeding, and if they choose to breastfeed being able to express and store their milk if they are separated from their baby.

For the last 20 years Birth Companions has been delivering these services for pregnant prisoners, and more recently for vulnerable women in the community. The women they support cannot speak highly enough of the charity. Often victims of sexual abuse or domestic violence, many women prisoners have mental illness and half have experience of alcohol or drug misuse. Many have high risk pregnancies and Birth Companions believes that pregnancy is an opportunity to empower these women and help improve their lives.

There are no official figures on how many pregnant women reside in prison but research has estimated that over 600 women receive antenatal care in prison and 100 give birth in custody each year. [1]

Mariam, who spoke at the charter’s launch, ended up in prison when she was eight months pregnant, seven years after a “silly mistake” at the age of 18.

“I didn’t know what my pelvic floor was until I signed up for the Birth Companions group,” she said. “But [choosing to take the offer of help] was probably one of the most life savings things I have done.”

Birth Companions told Mariam about the mother and baby unit, helped her write a birth plan, and “made me feel I was not alone on my journey.” “I wanted to be a glamour mum, but Birth Companions brought me back to my senses. Breastfeeding is the best decision I have ever made,” said Mariam (who remains glamorous).

Rebecca, another woman who was supported by Birth Companions while serving a three year sentence, has written about her experiences.

“Being pregnant in prison was a very lonely and dark time in my life—no one to feel your baby kicking except for other inmates. When I was eight months pregnant and had to go for a late scan, I was handcuffed on my way to the appointment—it was so degrading, people looking at you and judging you. It was the worst feeling in the world,” she said in her report.

“While I was in labour I had two prison officers at the end of my bed. I was having difficulties, which I am sure was partly because I was so stressed by having them there. My mum, dad and partner had to travel 100 miles to get to me. If the birth companion hadn’t been there, it would have just been me and the officers in the room. I was moved to a Mother and Baby Unit, which had an outside garden so at last I could feel the sunlight. I could express milk and store it in the prison freezer. I breastfed my daughter for a whole year and I’m currently breastfeeding my son, which I’m so pleased I could do.”

Explaining the need for the charter Delap said: “Although there are lots of examples of good work, there are also inconsistencies and short-comings that must be addressed urgently, so we’ve developed the Birth Charter. We have focused attention on the elements that have the biggest practical impact to ensure these women get the support they need, and are able to give their children the best possible start in life.”

Competing interests: I have trained as a volunteer for Birth Companions.