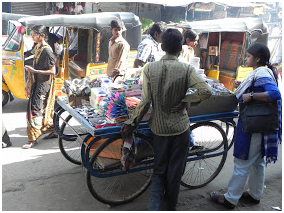 Severe heat wave conditions have been reported across India through the month of April this year. The situation has been especially severe in Telangana, Andhra Pradesh, and Tamilnadu. Most affected are the vulnerable poor, the elderly, and those with health complications.

We spoke to some people to see how they cope with the heat:

“We have to work to earn our living. Drink water and keep moving. We can’t stop.”

“I take care to sit in the shade and sell bananas. I drink water, buttermilk, and lime juice.”

“I park the rickshaw in the shade between trips and sleep off the afternoons.”

Acclimatization to extreme heat seems to be both through cultural practices of avoiding exposure and physiological adaptation.

Most self-employed persons and wage labourers can afford neither minimal safety measures nor avoid the sun because daily income is crucial to survival.

One young woman we interviewed had suffered heat exhaustion three days prior to our chat. She suffered what she called a “Yenda debba” (literally sun stroke), “was taken to the hospital, given a glucose drip, and sent back.” She started working the day after, when she felt a little better.

Life for the poor goes on.

North Indians are more adapted to summer heat than their southern brethren. They cover their face, neck and upper thorax while going out, offer guests large glasses of drinking water first, and consume summer specific drinks like “aam ras” or mango panna, lassi, and salt with onions.

Heat wave mortality in Telangana and Andhra Pradesh in 2015 was unprecedented.

According to national statistics, while children and the elderly are vulnerable, the young and middle aged succumb because of an unforgiving daily labour regime. In terms of gender, approximately five times as many men as women are recorded as dying due to heat stroke.

However, current informal reports from the CMC Vellore suggest that those getting admitted for heat strokes are the elderly, the physiologically compromised, and alcoholics.

Faced with these conditions, we worry about heat related mortality in other countries. The WHO predicts that “between 2030 and 2050, climate change is expected to cause approximately 250 000 additional deaths per year, from malnutrition, malaria, diarrhoea, and heat stress.” What global policies are being pursued to tackle this emergent situation?

With global warming, policies to handle heat related morbidity and mortality are essential:

We are grateful to Mithun Som for the statistical summary from ADSI reports and the interviews on the streets.

Yogesh Jain is a paediatrician and one of the founders of JSS Hospital in Ganiyari, Chhattisgarh.

All three authors are members of Medico Friend Circle, India.