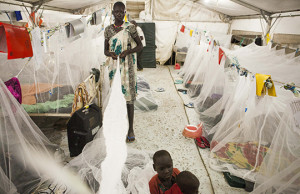 Since the early 2000s the world has seen considerable success in the fight against malaria, with a significant decrease in overall numbers of cases and deaths. But this success is uneven: there are still contexts where the toll of malaria is worsening and seasonal spikes in patient numbers are getting higher. Teams at projects run by Médecins Sans Frontières (MSF) saw particularly high peaks in 2012, 2014, and 2015—largely in the most difficult to reach areas of Democratic Republic of Congo (DRC), Central African Republic (CAR), and South Sudan, but also in countries like Uganda and Mali, which have stronger health systems.

A key question for the global health community has been: why? Some of these countries are strongly affected by conflict, and consequently have seen large population movements—a factor which probably contributes to increases at the local level in certain locations.

However, in places such as Yida, South Sudan, where the population has not grown, MSF outpatient facilities have nevertheless treated nearly three times as many patients in 2015 compared with 2014 (7532 in 2014 vs 19 338 in 2015 ), with a 4.2 fold jump in cases during the peak period of September to December (4052 in 2014 vs 17 055 in 2015). This is even after consultation criteria were changed to include only those under 15 years old (healthcare for adults was provided by another organisation). [1]

These increases seem to be driven by multiple factors, both local and regional. One contributor is the El Niño effect, a well known cause of increased temperatures, rainfall, and humidity in sub-Saharan Africa. These changes, in turn, could explain the rise in malaria cases through their effect on enhancing Anopheles mosquitoes’ development, survival, and capacity to transmit disease. Malaria spikes were documented in East Africa in 1997-98 and 2007, which were El Niño years, and strongly affected areas where the population had little immunity to the parasitic disease. [2]

Another possible contributor to the rising malaria burden in some regions is the growing insecticide resistance in Anopheles mosquitoes. Although data are scanty in many areas where MSF works, reduced efficacy has been reported for pyrethroids—the main insecticide used to impregnate bed nets and for indoor residual spraying—in several African countries.

A third factor could be improved case reporting. However, case numbers are increasing even at MSF facilities in areas such as Aweil, South Sudan, and Koutiala, Mali, where MSF has been working for years and there have been no significant changes in local access to healthcare or in data collection systems.

Whatever the causes may be, the response to these regional spikes has been largely reactive rather than proactive, which reduces effectiveness. Although both climate phenomena and resistance to insecticides were anticipated in advance and then documented when they materialised, little was done pre-emptively to prepare healthcare workers and facilities for the predictable increases in malaria they triggered.

South Sudan faces debilitating stockouts of antimalarial medication and other drugs, partly because health sector planning failed to take these malaria triggers into account and partly due to discontinuation of the Emergency Medicines Fund in June 2015. In Aweil State Hospital, the only secondary healthcare facility for an estimated population of 1.2 million people, shortages of antimalarial drugs at primary healthcare facilities may have fuelled the increasing numbers of severe malaria cases. MSF’s team at Aweil treated 1162 cases of malaria in 2013, 3529 in 2014 (also a malaria intensive year, but MSF supported and stocked the outpatient facility), and 4588 in 2015. [1] Yet in response to the increase in insecticide resistance, bed nets impregnated with insecticides known to be less effective are still being ordered for distribution in several countries with a high burden of malaria. [2]

Thankfully, the response has been more effective on other fronts, particularly in rolling out more preventive interventions using antimalarials in the high burden areas of west, central, and east Africa. Seasonal malaria chemoprevention, which uses non-artemisinin antimalarials for prevention in children under 5 in areas where malaria is seasonal, is now national policy in 13 countries of the Sahel. In 2016 over 15 million children will benefit from this intervention, which has been shown to reduce uncomplicated malaria by 80% and severe malaria by 70%. [3]

MSF has also implemented “one shot” strategies in CAR and DRC, using artemisinin combination therapies for treatment and prevention of malaria—even, where possible, combining them with vaccination campaigns. However, these are temporary solutions that have not yet been shown to affect malaria epidemiology beyond the 4-5 weeks of protection provided by the drugs, and that may not be sustainable in the long run.

To significantly and sustainably decrease the burden of malaria in the most affected countries, all relevant actors will need to adopt a more holistic approach—one that integrates interventions and research on health, climate, agriculture (and eventually economics and housing) in tackling the main factors contributing to the disease and its transmission.

This will require closer collaboration among different national ministries, UN agencies, research institutions, international organisations, and NGOs to improve health, vector control activities, and—in the future—education and housing. The current reactive “silo” approach will unfortunately only bring about temporary dents in malaria’s impact, while requiring much more effort and investment.

Estrella Lasry is a New York based tropical medicine adviser for MSF.