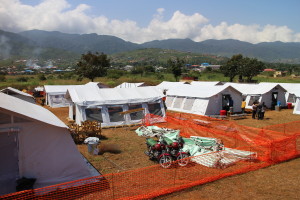 On the 14 January 2016 a new case of Ebola virus disease infection was confirmed in Sierra Leone, only hours after the World Health Organisation (WHO) declared that the Ebola epidemic was over. This was deeply disappointing, but had been anticipated by the organisations involved in the Ebola response. We know that Ebola sometimes persists in immune privileged sites in survivors and is present in the semen of male survivors for many months after recovery. There have been secondary cases associated with sexual transmission and therefore sporadic further cases were expected in the affected West African countries. There are also a few reports of resurgence of infection in survivors, although it is not yet clear if these carry a risk of spread to others.

In November 2015, in anticipation of further sporadic Ebola cases, medical and nursing staff from the Republic of Sierra Leone Armed Forces and Ministry of Health practiced deploying a Rapidly Deployable Isolation and Treatment Facility on the outskirts of Freetown. The RDITF is a tented Ebola treatment centre supplied by the UK Department for International Development. It is held by Sierra Leone’s 34 Military Hospital and is potentially able to deploy to the nearest military base to assist in managing any new outbreak of Ebola, or other infectious disease in Sierra Leone, within a few days of being activated.

The unit is staffed by doctors, nurses, and paramedical staff from the military and ministry of health, the majority of whom have extensive experience in treating patients with Ebola over the last year. As part of the training package associated with the RDITF medical, nursing, and logistic staff from the British Army and Navy spent three weeks in Freetown training the RDITF staff in logistics, recognition of various diseases, infection control measures, and many other aspects of providing safe, effective care.

The RDITF was a novel concept for many Sierra Leonean staff, whose previous experience had been working in fixed sites. Training began with several days of classroom training followed by clinical training in the field, with a series of realistic simulated Ebola patients. Doctors and nurses from WHO worked with us to ensure that the Sierra Leonean staff were trained to provide safe care based on existing WHO protocols. Key aspects of caring for patients with Ebola include making sure that staff are competent to keep themselves safe with personal protective equipment whilst at the same time minimising the risk of cross infection between patients. Alongside this they must be able to carry out clinical interventions in the limited time that they can remain in the red zone of the treatment centre.

Our British military clinical staff had worked in the MOD run Ebola Treatment Centre in Kerry Town, Sierra Leone in 2014 and 2015 and we found a shared bond with the Sierra Leonean clinicians and WHO staff, nearly all of whom had been involved in the Ebola response. The Sierra Leone doctors were often very junior, but had a year or more of experience of working in difficult circumstances, treating patients with Ebola, and taking on a huge burden of responsibility very early in their careers. The military and civilian nurses were also excellent, and were accustomed to working in roles that are not found in the UK, including providing specialist psychosocial support to patients with Ebola, and the Community Health Officer role, where experienced nurses provide senior input to settings where there is no doctor. A significant minority of the clinical staff were themselves Ebola survivors and their presence to reassure patients will be invaluable should the RDITF need to be deployed. The hope is that the availability of an effective Ebola vaccine will reduce the chance of another significant outbreak, but should there be another outbreak of Ebola, or another highly contagious infectious disease, the RDITF should be available to help contain and treat the outbreak, perhaps with mentoring from UK and WHO experts.