This is the fiftieth blog in my “When I Use a Word” series. You’ve been counting, of course.

To appreciate fully the range of words that imply “five” and “fifth”, “fifteen” and “fifty” requires an understanding of the phonetic phenomenon of assimilation, which is the modification of a sound in a word, phrase, or sentence, making it more like a neighbouring sound. For instance, in the word “goodbye” the d in “good” is assimilated to the b in “bye”, making it sound like “goobbye” or just “g’bye”. Similarly, “going to” becomes “gonna”; the g and t assimilate to the preceding n. Latin prefixes often change their final letter by assimilation; for example, ad (towards) + ferre (to carry) gives “afferent”.

Words that denote five have come into English from Sanskrit pancha, Greek πέντε (pente) or in some dialects πέμπε (pempe), and Latin quinque. In Teutonic languages Grimm’s Law turns pente into fem; femten in Danish and Norwegian (femton in Swedish) means fifteen.

The Punjab is a region of five rivers, from the Sanskrit pancha. According to Hobson-Jobson. The Anglo-Indian Dictionary, the rivers were the Indus, Jelam or Behat, Vitasta, Chenāb, and Biās. Punch was originally a drink containing five ingredients, arrack, sugar, lime-juice, spice, and water, from a Sanskrit word pañcāmṛta, five immortal nectars.

Derivatives of πέντε include Pentecost, the festival that falls 50 days after the Passover (Greek πεντηκοστή = 50); penteconter, a ship with 50 oars (πεντηκόντερος ναῦς); and pentecontadrachm, an ancient Cyrenian coin worth 50 drachmas (πεντηκοντάδραχμον). A pentagon is pentelateral. Pentene has five carbon atoms. Pempidine is pentamethylpiperidine.

Derivatives of quinque include quinquagesima, the period of 50 days before Lent; quinquelateral, having five sides; and quinquereme, an ancient Greek or Roman galley rowed by oarsmen arranged in groups of five. People are quinquedigitate, except, of course, the Simpsons, who have only four digits on each hand. Quinquecostate, having five ribs, refers to the five parallel lines on which characters of the ancient alphabet called ogham were based.

Quintessence (Latin quintus, fifth) was originally an essential addition to the four basic elements. Quintuplets, which can occur spontaneously, more often occur as a result of fertility medications such as clomiphene. Quentin (Latin Quintus) was a name given to a fifth son. In Spanish speaking countries a quinta is a villa in the country, one-fifth of whose estate is payable as rent. In the card game piquet a quint is a sequence of five cards of the same suit. A quincunx is an arrangement of five objects, usually trees, like the five spots on a die. Quincunxes feature prominently in Charles Palliser’s 1989 Dickensian novel The Quincunx.

Derivatives in English from the Teutonic languages include not only five, fifth, fifteen, and fifty, but also finger, fist, and foist (to cheat by palming).

The Système Internationales d’Unités (SI) was first introduced in 1948 and is full of etymological interest. Take for example, the prefixes for different powers of ten (see tables) and note femto, which stands for 10-15. Because the SI units do not stretch far enough on either side, some years ago I proposed new terms, which have since been listed and cited in the first five of the six volumes of Christoph Schiller’s wonderful series of books about physics, Motion Mountain, which can be downloaded free from motionmountain.net. The earlier prefixes start with a pattern, but then lose it; the later ones, however, from 1015 up and 10–21 down, are derived logically from consecutive Greek number words. For the new coinages I chose initial letters that were not already represented, continuing the backward progression through the alphabet that had already been started from Zetta and zepto. I hope that these coinages will eventually be fully adopted into the Système Internationales d’Unités, even if it takes 50 years. 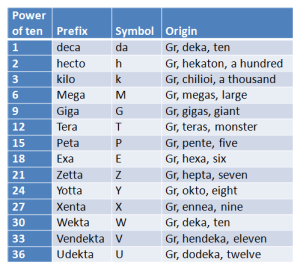 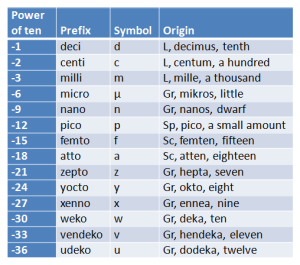 Tables: Pefixes to the names of SI units of measurement; the terms in the last four lines in each table (from 1027 and 10–27) are unofficial; L = Latin; Gr = Greek; Sp = Spanish; Sc = Scandinavian