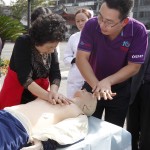 In any accident scene, rapid removal of the casualty to hospital improves their chances of survival. The term “Golden Hour” was first introduced in 1961 by R Adams Cowley, [1] but because of many misinterpretations as to what period this actually referred to, [2 3] a second concept, the “Platinum Ten Minutes” was proposed as the ideal amount of time that should be taken to move a casualty to an ambulance. [4]

In the first ten minutes, the ambulance and medical personnel must work in harmony with the police and fire service to secure the scene and remove the casualty safely and without causing injury either to the casualty or other personnel on the scene. Care should also be taken to preserve evidence at the scene for future investigation.

In 2010, China launched its “Emergency Platinum Ten Minutes (EPTM)” programme, which emphasizes self-rescue and assisted rescue within the first ten minutes after accidental injuries and emergencies occur. The programme teaches first aid skills such as the best time to do cardiopulmonary resuscitation (CPR), how to manage if a patient isn’t breathing, defibrillation, and prompt hemostasis. [5]

The goal is to reduce the mortality and the disability rates of accidental injuries and emergencies. This programme urges that public emergency systems should be started as soon as self-rescue and assisted rescue are initiated, and the EPTM should be used as the first stage of support with the 120 system (China’s emergency system). 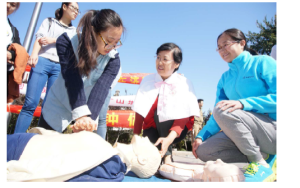 The 6th “EPTM—China’s Self-rescue and Assisted Rescue Day” took place in October 2015. More than 15,000 volunteers from 352 units came from 154 cities throughout China. The theme of this year was “Mastering CPR skills.” Volunteers taught first aid to more than 50,000 people through face-to-face counselling and training. Meanwhile, the participants were requested to answer a questionnaire about the use of CPR and other emergency skills. With the help of media publicity, a larger number of people began to pay close attention to EPTM, self and mutual medical aid, automatic external defibrillators, (AED), relieving airway suffocation, and trauma care.

In China, the growing elderly population has resulted in an increased need for proper emergency care, [6] and the top three most frequent diseases responded to by ambulance services are injury, cerebrovascular disease, and cardiovascular disease. [7] 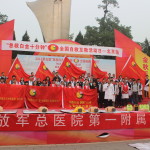 However, only 1% of the population in China know how to administer first aid. This gap is quite obvious when compared with other countries where the rate varies between 25% – 75%. [8] Since the 2003 SARS crisis and the 2008 Wenchuan earthquake disaster, China has become more active in the construction of public health systems, especially in regards to the emergency response system. [9] 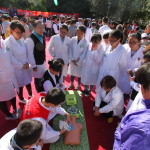 In the past decade, the Chinese government has greatly expanded coverage of health insurance and invested heavily in emergency services. It has been realized that the blank period of professional rescue after the incident is very important, and constitutes a great challenge to the national emergency system.

Zhongjie He is a professor at the department of Intensive Care Unit, First Hospital Affiliated to the Chinese PLA General Hospital, Beijing 100048, China.