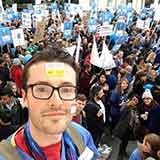 I couldn’t sleep yesterday morning. Something was wrong. On Saturday I joined 20 000 people marching in protest at the government’s threats to impose a new contract on all doctors below consultant level. Police in riot vans were parked on Parliament Square, and were met with smiling parents, pushchairs, and a lot of stickers. A helicopter circled overhead, filming the crowd. The chants in union for our union, the BMA, could be heard across London. I was so tired from being on my feet chanting all day, I thought I would have slept like a log, but I woke up on Sunday too early, feeling uneasy and restless. I checked the Junior Doctor’s Contract Facebook campaign group (55 117 members); all was well. I started receiving donations into a crowdfund to thank the organisers of the protest.

We always knew that the campaign on Twitter, set up to highlight the contract changes, was going to be successful. Doctors rarely post photographs of themselves in their uniforms or at work, and the iconic look of a set of scrubs and a stethoscope inspires the click of a “like” from friends and acquaintances. The use of the Twitter hashtags #notfairnotsafe, #iminworkjeremy, and #juniorcontract have helped the campaign trend on Twitter and go viral. Facebook was also used to great effect, with long soliloquies written by impassioned doctors, nurses, and patients, and the tagging of junior doctors in placards we had carried down Pall Mall on Sunday, while they worked on Saturday in hospitals and GP surgeries up and down the country.

The reason for my disappointment? I checked the national newspapers on Sunday morning to see the impact I had promised the supporters I met as I made my way to Parliament Square. This Sunday morning, only one out of eight of the largest national newspapers felt the protest worthy of a front page story. Other apparently more important events included an email sent in 2002 regarding the Iraq war, Amazon proposing to sue 1 100 fake reviewers, a report that statins might add three days to life, and two celebrities being in existence, talking to people and sending text messages. This to me is almost unbelievable, but the paucity of media coverage is not the sole reason I’m disappointed.

Writing this is helping to clarify the unease in my head, and I think I’m starting to pin down the nebulous feeling. I am haunted by an idea, and I’m now trying not to drop tears onto my laptop or into my coffee as I write. Just like me, over 60 years ago, Harry Leslie Smith lay awake in bed. He was listening to the cries of people on his street dying of cancer in pain. People, he said, who could not afford morphine. People who lived and died before the NHS existed. Mr Smith, in a wavering voice, described this time as a “primitive age” when he spoke to the crowd of silent and humbled doctors, nurses, and supporters on Sunday. I’m haunted by the prospect of returning to that age.

I am disappointed by myself. For now, for the first time, I know I must support strike action in the war to dis-appoint Jeremy Hunt. Where do you stand?

Competing interests: Author has officership of a fundraising website to thank the organisers of the protest—the author does not benefit from this and was not asked to establish this by the protest organisers.  www.gofundme.com/thankfamousfive (established 17/10/15).