Of the dozen early medical words I found in the Old English dictionary called the Epinal glossary, five were anatomical:

Three of these are still with us: bladder, gristle, and thumb. The other two, atter and throat-boll, have disappeared, both having been replaced by modern forms.

Of these five, the most poetic is the throat-boll, the thyroid cartilage or Adam’s apple, for which we do not now have a single word. The Indo-European root BHEL connoted anything swollen, such as a ball, a billow, a bulla or blister, a boil, and a bladder. And just as the roots of plants generate leaves, so the Indo-European root BHEL generated the Greek word φύλλον, a leaf, and the Latin word flos, a flower, with its swelling efflorescence. The φαλλός, Latin phallus, which also swells, is prominent on a bull, although that may also have been influenced by the German word bulle, to roar. A bullock was originally just a young bull, but it later came to refer to a castrated bull or ox. The balls or ballocks are anatomically and etymologically not far away. Bollock grass was a name given to different kinds of orchid, whose tubers resemble testicles (Greek ὄρχις, which also meant an olive). And further up the body we find the throat-boll, the swelling in the throat.

In Old English the word boll was pronounced with a long o, like poll, roll, and toll, although those words retained their original forms, while boll became bowl. If throat-boll had survived we would probably now call it the throat-bowl.

Genesis tells us that God created Adam (Hebrew אדם) from the dust of the earth, in Hebrew adamah (אדםה). The Latin equivalent of this is the idea that homo was made from humus. The Hebrew word for red, reflecting perhaps the colour of the dust, is adom and in modern Hebrew rubella is ademet. Israel’s emergency medical service is called the Red Star of David, the Magen David Adom, which is now a member of the International Red Cross and Red Crescent Movement. Coincidentally, it is also known by its abbreviation MDA (םד”א), pronounced madah, which reverses the name of Adam.

Genesis also tells us that when Adam was only a few hours old, but mature for his age, God brought all the animals and birds to him, “to see what he would call them”, as depicted in medieval manuscripts (picture). Not to ask him to name them, note, although that is how this passage has been interpreted, because in the Authorized Version, for example, we read that what Adam called an animal “that was the name thereof”. In Hebrew the distinction between the verb “to call” and the noun “name” is clear. The Vulgate says that Adam called the animals “nominibus suis”, i.e. “by their own names”, which suggests that they already had names given to them by God and that Adam called them by those names. Martin Luther referred to Adam’s certain knowledge (bestimmte Kenntnisse) of what to call the animals. 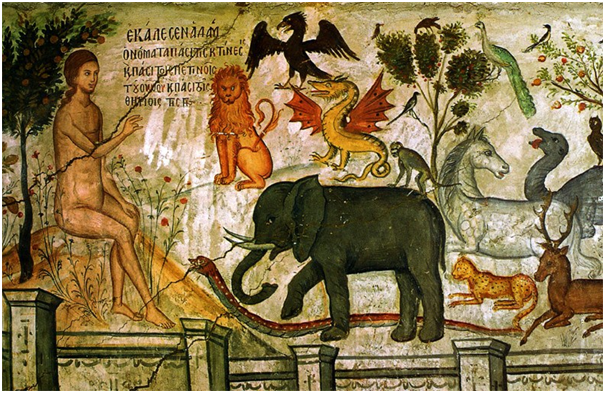 Genesis doesn’t, however, tell us that God asked Adam to name the herbs and trees, over which he also gave Adam dominion. So, when he tells Adam that he may eat anything in the garden except the fruit of the tree of the knowledge of good and evil he doesn’t name the fruit. What it was will have to wait until next time.

Meanwhile, we may note a pharmacological Adam. Ecstasy, XTC, or just E, was first synthesized in 1912 by Anton Köllisch, working in the German pharmaceutical company Merck, who were looking for a styptic. They called it “Methylsafrylamin” but its full name is 3,4-methylenedioxy-N-methylamphetamine, conveniently abbreviated to MDMA. It was rediscovered by Alexander Shulgin in the 1960s and when it became popular as a recreational drug in the 1980s people started calling it Adam. It has also been called “love pill”, perhaps because it brings out the old Adam in us all.