At a time when public and media interest is waning, the Ebola epidemic in west Africa shows no signs of ending. With Guinea and Sierra Leone still reporting new cases on a weekly basis, hopes of Liberia being declared Ebola free have also been dashed with six new cases reported since the end of June.

Despite the relatively small number of new infections in Sierra Leone when compared to this time last year, the arrival of the rainy season and cross border travel from Guinea are proving thorns in the side of Sierra Leone’s response to Ebola.

The Kerry Town treatment unit (KTTU), funded by the Department for International Development (DFID) and run by the military, has acted as a backstop for expatriate and national healthcare workers alike since November 2014. As the Ministry of Defence (MOD) reached the end of its involvement at KTTU (the army is still heavily involved in central coordination of the response), DFID has contracted the running of the unit to Aspen Medical. Having been involved in the Ebola response since November 2014 in two separate, NGO led Ebola treatment units, and now as part of the Aspen Medical team, I have experienced both sides of what the unit can offer. I am in little doubt that the security of high level care at KTTU has encouraged international and NHS staff to support the Ebola response in Sierra Leone.

Notwithstanding the potential for prompt and high level care, coupled with rapid repatriation offered to international workers, the unit has the ability to offer a “western” standard of care to the heroic Sierra Leonean healthcare workers. I don’t use heroic lightly, the majority of national staff have been working tirelessly and with enormous dedication since the start of the outbreak—without a break, at enormous risk, and while watching their own families and communities decimated. A recent study in the Lancet reported that 6.85% of Sierra Leonean healthcare workers have died of Ebola, compared to 0.06% of the general population. 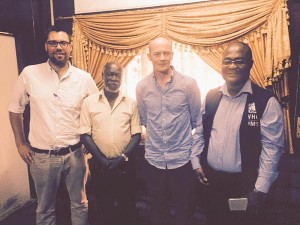 The clinical team at the unit have collectively seen and treated several hundred Ebola patients. With clinicians experienced in infectious diseases, anaesthetics, intensive care, and nephrology, KTTU can offer an unrivalled level of expertise and resources to Sierra Leonean healthcare workers infected with this deadly disease. With the mainstay of clinical management being intensive fluid resuscitation and electrolyte management, it could be argued that nephrology and ICU are the ideal specialities to accompany infectious diseases in the care of Ebola patients.

Being involved in the team that continues and develops the work done by the MOD is a real honour and a privilege. Hopefully, the reassurance offered by the presence of KTTU will encourage the national and international response to continue until west Africa achieves the goal of zero cases.

Daniel Cooper is a specialist registrar in nephrology and internal medicine in the West Midlands, currently on a three year OOPE to pursue humanitarian and international work. Initially deployed as an NHS volunteer, Daniel has spent the past seven months working with NGOs treating Ebola patients. He is now part of the team running the DFID funded Kerry Town treatment unit with Aspen Medical.

I have read and understood BMJ policy on declaration of interests and declare the following interests: None