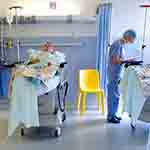 Elsewhere, John Appleby writes that the rising proportion of operations carried out as day cases over the past few decades has been “good for patients and a much more efficient use of NHS resources.” Appleby says that following the creation of a Department of Health task force on day surgery, along with £15m (€21m; $23m) of capital funds to expand the number of dedicated day surgery units, almost all trusts have at least one unit. He argues that if the move to more day cases hadn’t been made the cost to the NHS would have been far greater. In fact, by treating more patients as day cases, “the NHS had in effect saved around £2bn by 2013,” he says.