There is a bewildering number of ways to break a word.

In metanalysis you reinterpret the form of a word, creating a new one. An umpire, for example, was originally a noumpere, from the old French word nonper, peerless, although one batsman suggested, when I gave him out, that it was from non père, fatherless (at least I think that’s what he meant).

Aphaeresis (Greek ἀφαίρεσις, removal) is the omission of elements from the beginning of a word—linguistic amputation. Examples include burger, cello, copter, phone, and statin. A bus was originally an omnibus (Latin, for all). Aphaeresis also means surgical excision, amputation, or tooth extraction (obsolete meanings). Plasmapheresis is separation of elements of the blood. In extracorporeal photopheresis, leukapheresed peripheral blood mononuclear cells are exposed to UVA light in the presence of the photosensitizer 8-methoxypsoralen and then reinfused, a technique that has been used to treat a range of conditions, including bronchiolitis obliterans, haematological malignancies, autoimmune diseases, and acute graft-versus-host disease.

Apocope (Greek ἀποκοπἡ, a cutting off) is the opposite, the omission of elements from the end of a word: kit for kitten, marge for margarine or Marge for Margery, journo for journalist, lab for laboratory, cipro for ciprofloxacin, simva for simvastatin.

Sometimes aphaeresis and apocope co-exist—linguistic phocomelia. Elizabeth becomes Liz or Liza and a detective a tec. From a quick Pubmed search, I found that “influenza” is much more commonly used in bioscience papers than “flu”, except that “flu-like” is almost as commonly used as “influenza-like” (table). I just thought you’d like to know that.

Aphesis (Greek ἄφεσις, letting go) is “the gradual and unintentional loss of a short unaccented vowel at the beginning of a word” (OED). “Squire” for esquire, “ten…shun!” for attention! The process is similar to aphaeresis, and the two words are often used interchangeably. Aphesis sometimes produces a new word altogether: a slant is aslant, a longshoreman is one who works alongshore, the vanguard is avant garde, a bishop is episcopalian, and a sample is an example. In his lipogrammatic novel La Disparition, Georges Perec completely avoided using the letter e, although he couldn’t avoid it in the byline. When Gilbert Adair translated Perec’s novel into English he called it A Void, aphetically avoiding the use of the otherwise ubiquitous letter. Spaniards have difficulty in pronouncing English words that begin with s and they add an e at the start—prothesis, the opposite of aphesis; esnobismo is snobbery; and esmoquin is a dinner jacket. Conversely, English has words in which the initial Spanish e is dropped: España becomes Spain and estivador, a packer, becomes a stevedore.

Lone fibrillation is fibrillation that has no apparent cause—it is aphetically “alone”. It was first named by Evans and Swann in 1954 (picture). I recall a student who presented a case of atrial fibrillation and described the differential diagnosis. Her last entry was “loan fibrillation”. It was just a typo; she knew what it should have been. But a colleague suggested that it was the arrhythmia you get when the building society forecloses your mortgage. 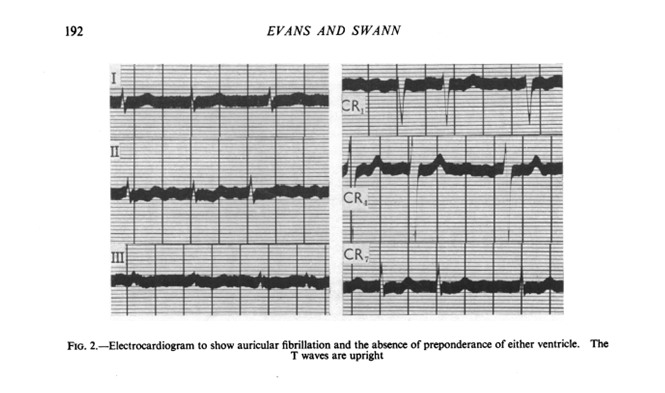