Metanalysis is when you break a word badly. It’s defined in the Oxford English Dictionary as “the reinterpretation of the form of a word, resulting in the creation of a new word; esp. the changing of the boundaries between words or morphological units.” Pea and cherry fit the first part of this definition; they were derived by metanalysis from pease and cherise, original singular forms that sound plural. The second part describes how a word breaks up into smaller parts, a new word being formed. In about the 15th century the indefinite article, a or an, was commonly written in combination with the accompanying noun as a single word (aman, anague). When a century or so later they became separated again, there was often uncertainty about where the division should occur. In some cases this led to spurious metanalytic words (for example, a nague), a few of which persisted. Take a naedre, the Old English word for the viper: having been written “anaedre,” it became an aedre, the break occurring after the n. Netherfield in Sussex was a place where adders were found. Similarly, an ekename, having become anekename, then became a nekename or nickname, the break occurring before the n.

Other examples of metanalysis of a/an include:
• eye, a brood of pheasants, originally a nye, from the Latin nidus, a nest; as The Chambers Dictionary puts it, “an eye for a nye”;
• notch, a nick in a piece of wood or other material, from an early 14th century Anglo-Norman variant, noche, of the Middle French oche, an incised mark used to keep a record; perhaps connected with the oche, the throwing line in darts, although the OED thinks that unlikely.

Comparable changes in French have given landier, an andiron, originally andier plus the definite article le, and l’avenir, the future, which is la venir, that which is to come. In Italian l’abadessa, the abbess, became la badessa. And Oporto in English is o Porto in Portuguese.

Aphaeresis, which also means surgical excision and separation of elements of the blood (as in plasmapheresis), linguistically is the omission of one or more sounds or letters from the beginning of a word; verbal amputation. It can sometimes look like metanalysis, as in “penthouse,” which was originally appentis, from the Mediaeval Latin word appendicium, something added on, originally a lean-to or outhouse.

Anatomy comes from the Greek ἀνά (ana, up) and τέμνειν (temnein to cut). Today it means the study of the structures of the body or the structures themselves, but at one time it also meant a skeleton. The initial a was first aphaeresed to notomy; then, by metanalysis, “a notomy” became “an atomy” or “an otamy.” By extension, atomy also came to mean someone very thin or skeletal. Here it is in Henry IV Part 2 (5, iv, 29): “. . . you starved bloodhound . . . Thou atomy, thou!” And Dickens used it figuratively in Dombey and Son (1848): “Withered atomies of teaspoons”; and in Little Dorrit (1857): “[The bed-room’s] movables were ugly old chairs with worn-out seats, and ugly old chairs without any seats; a threadbare patternless carpet, a maimed table, a crippled wardrobe, a lean set of fire-irons like the skeleton of a set deceased, a washing-stand that looked as if it had stood for ages in a hail of dirty soapsuds, and a bedstead with four bare atomies of posts, each terminating in a spike, as if for the dismal accommodation of lodgers who might prefer to impale themselves.”

“Otamy” continued to be used to mean a skeleton up to the first half of the 18th century, and “atomy” until as late as the 1930s. Witness, for example, John Gay in The Beggar’s Opera (1728; picture). 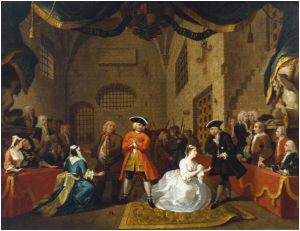 The Beggar’s Opera, scene 5, as visualized by William Hogarth (1728)

When Matt of the Mint is asked what has happened to his brother Tom, he says that he had an accident—in other words, was hanged: “I could not save him from those fleaing rascals, the surgeons; and now, poor man, he is among the otamies at Surgeons’-Hall.” “Fleaing” here is a variant of “flaying”; to “flay” originally meant to strip or pull off someone’s skin, and therefore came to mean to strip a person of his money or belongings by extortion or exaction. So Gay’s “fleaing surgeons” are cheats or thieves. As a physician, I couldn’t possibly comment.