Last year we published the obituary of Arthur Hollman, cardiologist, medical historian, and plantsman, who looked after the garden of the Royal College of Physicians in Regent’s Park in London. In 1978 he implemented a new garden scheme, linking its plants and trees with medicinal uses and British doctors. The college offers regular guided tours round its garden, and, with my interest piqued by Hollman’s life story, I decided to go along on 1 April 2015.

The violets and cyclamens were in bloom, although most of the vegetation was still a bit hesitant in the cold weather. The garden includes about 1000 plants with “medicinal” uses and some 200 that are named after doctors. One of the first things our guide, garden fellow Professor Michael de Swiet, told us about was the rather fantastical sounding “doctrine of signatures,” which states that herbs that resemble various parts of the body can be used by herbalists to treat ailments of those parts of the body. Examples include lungwort and eyebright; the walnut resembles a human brain, the tomato with its four chambers a human heart, and the kidney bean, a kidney, and so on.

Many of these associations still seem to inform modern health beliefs and received wisdom, and it is interesting that at times, the doctrine of signatures has not been used to identify cures, but to remember them—which makes it sound rather less esoteric. In Europe, it was often applied after the plant’s efficacy had already been established—and also in the sense that cures for diseases would be found near their causes: the willow, whose bark contains acetylsalicylate (aspirin), an antipyretic, grows near swamps, where one might catch malaria or other fevers. 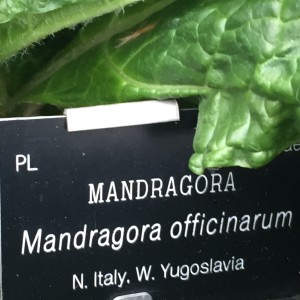 The garden includes geographically planted beds as well as themed ones, and Professor de Swiet kept us entertained with facts and anecdotes that ranged from Hippocrates to Harry Potter (when we studied a mandrake, pictured) and Julius Caesar to Moses (when we looked at a banana tree).

All this provided fascinating food for thought, and it would certainly be worth visiting the garden regularly, as different species start sprouting or flowering throughout the year. I will certainly be back.

Birte Twisselmann is web editor and obituaries editor, The BMJ.