Exploring the English phonemes, I have reached the unvoiced labiodental fricative f. When consonantal shift changes p, the unvoiced bilabial plosive, into f, a breath becomes a sneeze, even though it is the p that is plosive.

A patient with peripheral edema and lung crackles on auscultation, who appeared to have cardiac failure, not only had no orthopnea, but felt more breathless sitting up; a CT scan showed interstitial pneumonitis, which was attributed to amiodarone.

The Indo-European root ERDH meant to grow properly. The Greek derivative ὀρθός (orthos) meant straight, upright, or vertical. [The little comma over the first letter was called a smooth breathing, inserted over an initial vowel to indicate the absence of aspiration; a reversed comma was a rough breathing, indicating aspiration—Latin asper = rough.] So orthopaedics is to do with making children grow properly, orthodontics with making the teeth grow straight, and orthoptics with correcting faulty vision (literal rather than metaphorical—someone ought to invent political orthoptics). Orthoepy is proper pronunciation, orthography proper spelling. Orthopnoea is breathing [more easily] while upright.

A feeling of breathlessness, or worsening breathlessness, on sitting up (i.e. the opposite of orthopnoea) was first described in a patient with a post-traumatic intrathoracic arteriovenous shunt who had a threefold increase in ventilation and reduced arterial oxygen saturation when upright. What should we call that? Well, if orthopnoea means breathing [more easily] upright, what we need is a word that means breathing [more easily] supine. The Greek word for supine was ὕπτιος (huptios; note the rough breathing), suggesting “hyptiopnoea.” However, when they described the symptom in a patient with severe obstructive emphysema, Altman & Robin invented “platypnoea,” admittedly more euphonious, using the Greek word for flat, πλᾰτύς (platus).

Confusingly, platypnoea is accompanied by orthodeoxia, hypoxia on sitting upright—a term that Robin and his colleagues introduced in 1976 when they described two patients with right to left vascular shunting in the lung bases associated with chronic liver disease and one with multiple congenital pulmonary arteriovenous fistulae. Since then, there has been a steady increase in the number of reports (figure). 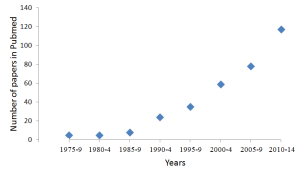 Papers published since 1975 retrieved from Pubmed by searching for “platypnea OR orthodeoxia” (total 329 papers). Click graph to enlarge.

Now what about the –pnoea in orthopnoea and platypnoea? The Indo-European root PLEU meant to flow, giving pleura and pleurisy—and, by metathesis, pulmonary. PNEU was the nasalised form, giving the Greek words πνεῦμα (p´neuma), breeze, breath, spirit, and divine inspiration, and πνοή or πνοιά (p´noē or p´noia) breeze or breath. Consonantal shift in PLEU from p to f gave flow, fly, flitter and flutter, float, flotilla, flotsam, fledgling, and fletcher, a man who makes arrows. And the same shift in PNEU gave fneeze. Now that’s not a misprint. Words for sneeze in various old languages all began with fn, like fniezen in old Dutch and fnýsa in Old Norse. The initial fricative was then dropped, giving modern Dutch niezen, German niesen, Danish and Norwegian nyse, and Swedish nysa. But in English neeze, by association with sniffing and snorting, became sneeze, although for a while both were in use.

French, on the other hand, has éternuer, Italian starnuto, and Greek φτάρνισμα, which come from a different root, STER, giving us sternutation, the technical term.