“Aah,” the maximally low and back rounded vowel sound, produced by opening your mouth and glottis and phonating, is not the only phoneme that could have formed the first linguistic sound. Change the shape of your mouth, keep phonating, and the sound changes. Interjections such as “eh” and “er,” “oo” and “oh” can all be made in this way.

The phonemes “aah” and “nnn” give us prefixes and words that mean “no.” To indicate “no” speechlessly you shake your head. To emphasise it you can grimace and phonate twice, “ah-aah” or “n-nn.”

The Greek privative prefix a– (expressing negation) can be seen in words such as aplasia, asterixis, astigmatism, atresia, and (as an-) anaesthetic, anorexia, and carbonic anhydrase. Goblets encrusted with amethysts were supposed to prevent drunkenness (Greek μέθῠ = wine, from which also come mead and methylated spirits).

The prefix a– also occurs in Sanskrit, as in the Indian girl’s name Amrita (literally deathless) from the Gods’ drink of immortality (compare ambrosia in Greek). Ahimsa, a policy that Mahatma Gandhi preached, means without himsa or injury, i.e. non-violence, and adharma is unrighteousness (the opposite of dharma, custom, or correct behaviour). In classical Sanskrit texts, the Bhagavad Gita for example, this type of negative form is a common device, facilitating alliteration and assonance.

In Latin the privative prefix was in– and its variants (il–, im–, ir–), as in incontinent, illegitimate, immature, and that irritating phrase, irregularly irregular.

Many negative Latin words, and a few Greek ones, begin with an n: ne (lest, or so that not), nec, or neque (nor), nefas (unspeakable), negare (to naysay), nemo and nullus (no-one), neuter (ne uter, not either), nil and nihil (nothing), non (not), num (surely not?), and nolle (to want not to, as in volens nolens, willy-nilly). Nepenthes, a Greek nickname for Apollo, gives us the opioid nepenthe (νή πένθος = no pain or sorrow). Some words have a surprising “no” in them. “Negotiate” was Latin necque otium, no leisure, and “necessary” is from ne cessum, not given up.

NICE stands for the UK’s National Institute for Health and Care Excellence. A complimentary acronym you might think. But in Latin “ne/scire” means not to know and the adjective nescius means stupid. Nice originally meant foolish or ignorant and later came to mean wanton, strange, lazy, unwilling, or fastidious. By the 16th century it came to mean precise and accurate, but other meanings included slender, trivial, uncertain, and delicate. Chambers’s Twentieth Century Dictionary (1959 edition) lists among possible meanings “calling for very fine discrimination,” “done with great care and exactness,” and “accurate.” Then it puts the boot in: “used in vague commendation by those who are not nice.” How nice is that?

In recent years we have been encouraged to publish negative results—to reduce publication bias. Searching Pubmed for papers whose titles contain the words “no effect,” I found only 11 from 1951 to 1970. The first was in a translation from the French (“n’agissent pas”) and the next, in 1958, was in English. The number then increased, peaking in 2012 at 130. Of course, the total number of publications has also been increasing, so I corrected the figures per million total publications (figure). The proportional rate increased steadily, plateaued in around 2003, and then started to fall. Are investigators publishing relatively fewer negative results? 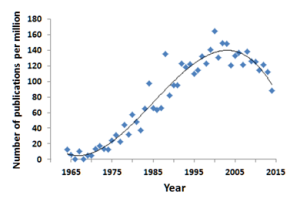 Numbers of publications with “no effect” in the title, 1964–2014, expressed per million of all published papers (source Pubmed).