We may not know what the first spoken word was, but we can be pretty sure that the first uttered sound (Greek φώνημα) was a phoneme, a unit of sound that cannot be analysed into smaller units. English has 44: 24 consonantal sounds, 12 pure vowels (seven short, five long) (see picture, below), and eight diphthongs.

Open your mouth and glottis. Now phonate. The sound will be a vowel. And if you’ve opened wide it will be “aaaaaaaaah.” 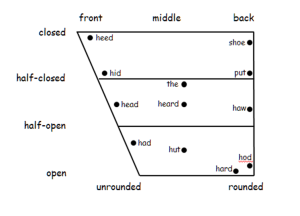 English pure vowel sounds, showing the forms of the mouth and lips (left and bottom) and the part of the tongue affected (top) in the oral cavity, represented as a trapezium.

The sound “aah” can express various emotions, including:
• sorrow, distress, regret—“Yet much I fear (ah! may that fear be vain!)” (Alexander Pope’s translation of The Iliad);
• pleasure, surprise, wonder, admiration—“Ah me, how sweet is love” (Romeo and Juliet);
• entreaty, appeal, remonstrance—“Ah Christ, that it were possible / For one short hour to see / The souls we loved” (Tennyson, Maud);
• dislike, aversion, contempt—“Ah villain, thou wilt betray me” (Henry VI Part 2);
• opposition, objection (to what has been said)—“‘Ah, but no, Madame,’ the woman answered, with a shrill scream of protest.” (Mary Braddon, Lady Audley’s Secret);
• realisation, discovery, inspiration—“Ah, you want money, Miss Frost” (J P Donleavy, The Ginger Man);
• pain—“He turned . . . and bit the professor’s finger till it bled. ‘Oh! ah! yah!’ cried he.” (Charles Kingsley, The Water Babies).

“Ah” can also be a conversational filler, like er or um, an interjection meaning “yes,” and a verb meaning to say “ah.”

But nowhere in standard dictionaries is “say ‘aah’” defined as a medical instruction to phonate with the back of the tongue in its lowest position, preferably with a falsetto pitch.

A colleague, composing an exam paper, wanted to describe a patient with a hoarse voice, whose palate moved upwards to the right when he phonated. How, he asked me, should he spell the sound? Now there’s no standard way to spell utterances of this sort that are not proper words. I recommended “aaah,” but could have suggested “a,” “ah,” “aah,” and “aagh” or even “aargh.”

In 14 textbooks on clinical examination that I have consulted, the instruction to ask the patient to say “ah” appears in the section on examining the ninth cranial nerve. In eight of them the spelling is “ah,” in four “ahh” or “ahhh,” and in two “aah.” Three of the instances of “ahh” were in American texts. In two cases (one “ah” and one “ahh”) the authors added an unnecessary exclamation mark.

I prefer “aah” or “aaah,” because the sound that the patient is asked to make is prolonged and is the vowel sound a (technically the maximally low and back rounded vowel sound), not the aspirate h (technically a voiceless glottal fricative). It could even be “aaaah,” as used in the English translation of the title of a Dutch paper, “Zeg ‘ns Aaaa,” which was not about the Dutch TV medical sitcom Zeg ‘ns Aaa. See the difference?

Counter examples, such as “ahhh” and “ah-h-h-h-h,” are generally American.

Other “aah’s” include Aah III, a haemorrhagic toxin from the venom of a snake Agkistrodon acutus; Aah VI, an N-glycosylated anti-insect toxin that has been isolated from the venom of the Androctonus australis hector scorpion; and the AAH genes, which code for amino acid hydroxylases or autotransporter-adhesin-heptosyltransferase, not to mention AAH (asymmetrical apical hypertrophy [of the heart] or atypical adenomatous hyperplasia [of the prostate or lung]). Then (and I can stop this any time I like) there’s Ah (the SI unit of charge, an ampere-hour); AH (anno Hegirae, in the year of the Hegira); and Say Aah, the hip hop hit by Trey Songz.