Pressure on emergency departments reaches its peak during the winter months, and the festive period puts the cherry on the Christmas cake. Data published last week show that the percentage of patients seen in English emergency departments within four hours was the lowest since records began in 2010 (<90%). In addition to the predicted winter hike in admissions for influenza and chronic conditions, Christmas brings a huge influx of people with alcohol related complaints.

Unfortunately, for some people “painting the town red” becomes more literal when they wind up in A&E with a broken bloody nose. Acute nasal injury is a common presentation to primary care and emergency departments, and causes epistaxis, nasal fracture, and even nasal septal haematoma. Nasal fractures are most commonly caused by assault. Razavi and colleagues explain what to ask patients, how to assess them, and how to rule out pathology requiring urgent specialist referral.

Something else that may have slipped under your nose is our latest State of the Art review on the initial management of Parkinson’s disease. Parkinson’s disease is one of the most common neurodegenerative disorders in the US and UK, second only to Alzheimer’s disease. Currently no drugs can stop the associated cellular degeneration, so treatment revolves around when to start dopamine therapy and which drug to choose.

The complexity of the clinical picture and the array of drugs to choose from can make management challenging. The authors review the evidence for each drug and suggest how it can be tailored to each patient’s clinical presentation and preferences. The key points are summarised in a helpful infographic. 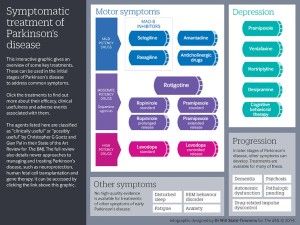 If that doesn’t float your Christmas boat, then we have some more lighthearted articles as you slope into a mince pie induced stupor. Suresh Ramnath, assistant professor of neurological surgery at the University of Michigan, writes about some of his favourite transcription errors in his neurosurgical notes.

He recalls that many of his patients are “neurotically” intact but have pain in the “psychiatric nerve.” Others have had “grandma” seizures . . . and some can “heal walk.” Gait has been described as “semitic,” and some have an “interior tremor.” The take home message? Read your letters before you sign them! We’d love to hear your experiences of errors in translation so please send a rapid response to thebmj.com.

We’ve also had lots of responses to a feature published last week by Richard Smith, “Are some diets mass murder?” in which he concludes that diets based on poor nutrition science are an uncontrolled experiment that could lead to bad outcomes. Some responders are critical of Smith’s “cherry picking” of the evidence, and his emphasis on popular diet books, which are written by lay people and “not subject to any kind of rigorous scientific fact checking.”

Others applaud Smith’s analytical approach and share their own theories about what went wrong in the diet wars. One retired doctor believes that biases towards certain outdated theories taught in medical school are partly to blame, and that “dietary guidelines since the 50s went wrong, and with them the awful state of health of many, many millions of people.”

And with that sobering thought, it’s time to embrace the festive season, forget about dieting, and have another mince pie. Resolutions for 2015 are a whole year away. . .

Merry Christmas and a very happy 2015.