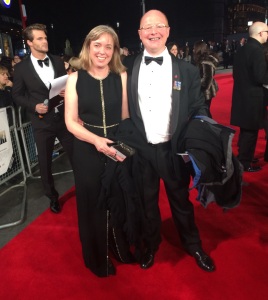 It’s not every day that one is asked to get involved in making a major war film, so when I received an email about the Kajaki movie project through the Pegasus Network, I was intrigued. As a former airborne soldier, I’d heard of the Kajaki Dam incident of course, but it didn’t seem like a suitable subject for a film. From my personal standpoint, having left the Army in 2001, my main focus had been on working tirelessly to build my civilian practice in surgery—which was probably why I had been approached as a potential investor!

From the outset I was quite sceptical. I knew nothing of the film industry except that it was highly speculative and, having been quite a risk taker in my youth, I had settled back into a more sedate and predictable outlook on life in middle age.

However, there were many aspects of the project that resonated with me. While still a junior surgeon, I had done two tours in Afghanistan with the HALO Trust landmine clearing charity in 1992 and 2000, and further stints in Mozambique, Angola, Sri Lanka, and Northern Iraq. Unusually for a doctor, I had been present on two separate occasions when people were blown up right in front of me in minefields. I had also served as the surgical support to the Airborne Brigade and with 144 Parachute Medical Squadron (RAMC), experiencing the rigours of “P” company selection; the unique bond and camaraderie of the Airborne Brotherhood; and being deployed to Rwanda, Bosnia, and Kosovo.

In common with many people with military experience, I often find war movies quite irritating. Ridiculous plot lines, implausible dialogue, or lack of attention to detail of weapons and insignia by the Hollywood style merchants all reveal a lack of understanding of the subject, and inappropriately trivialise or glamorise conflict, which to soldiers and their families is a deeply serious business.

With these reservations I arranged to meet Paul Katis, the director, in a London café in early January 2014. Right from the start I was impressed by his intense commitment to telling the story as it was; he had been trying for nearly two years to raise the money to make the film and was determined to succeed. Although I was approached as a potential investor, during the course of our discussion it became apparent that I had technical knowledge and experience to contribute, as well as finance. I think Paul may have realised this when I produced a PMN landmine from my daysack, to show him the type of weapon that caused the injuries on the day.

My value to the project ranged from advice about what a live mine strike looks, sounds, and smells like close up, to analysis of the injuries caused and the type of weapons that produced them. For example, explosions are often portrayed on screen as involving large amounts of flame and with bodies being thrown into the air—that’s rarely the case for a mine strike in Afghanistan, where the fireball is suppressed by large amounts of dust and debris, and an 80kg soldier usually just falls over after standing on a buried landmine.

Paul was also interested in how injuries look, and how to present them to a non-medical audience in a realistic way, but without making the viewers throw up—not an easy line to tread. Having done a lot of basic research on mine injuries and protection in the past, as well as treating many patients wounded by mines, I have an extensive collection of photos that were useful in this respect.

Crucial to the film was an accurate portrayal of the timeline and development of injury, from the point of wounding to the evacuation. For example, how long is a 15mg shot of morphine effective, and what are the physiological effects of prolonged bleeding on consciousness and human actions? I advised on this, along with guidance about how people react and perform in moments of extreme stress.

Somewhat to my surprise, the team brought the film in on time and on budget, but apart from seeing the trailer and reading a couple of reviews from journalists who had seen the press screening, I had no clear idea of what the movie actually looked like until the evening of the premiere. I was absolutely stunned. The most striking initial impression was the fantastic attention to detail, right down to the tattoos and the way the actors speak to each other—exactly like real soldiers. As I told my friends later, if there was a swearing filter put on the soundtrack it would be a silent film.

Although I knew every detail of the story, and had read all the reports and after action statements, once the first mine strike happened I was totally gripped. The make-up people completely excelled themselves in portraying the wounds: totally realistic and convincing, even to a surgeon.

The stark reality of this movie will not appeal to everyone. Many prefer their war movies to be sanitised and neatly packaged, where the violence is pastiche and the suffering reassuringly brief. Watching wounded blokes waiting hours in agony in a minefield with limited pain relief is not necessarily what the “Great British Public” want to see, but see it they should, because that’s what really happened, and this film is nothing if not real and unflinchingly honest.

I urge everyone in the UK to see this movie—and not just because I am an investor in it—it is a tale of ordinary men doing extraordinary things in circumstances beyond the imagination of most people. Concepts such as “duty,” “loyalty,” and “sacrifice” are mere words to many of our fellow citizens; soldiers live and sometimes die for those ideals and, what is more remarkable, is that they often come back for more.

Kajaki—the true story is a remarkable and important portrayal of the realities of modern war from the soldier’s perspective. I am very proud to have played a tiny part in making it happen.

Eddie Chaloner is a consultant surgeon in London. He qualified from Oxford University in 1989 and trained in surgery in London and South Africa. As a junior surgeon, he worked extensively in many countries with the HALO Trust (landmine clearance) and Médecins Sans Frontières. He served in 144 Parachute Medical Squadron (RAMC) as surgical support to the Airborne Brigade and Parachute Regiment, being deployed to Rwanda, Bosnia, and Kosovo.

I declare that I have read and understood BMJ policy on declaration of interests and declare the following interests: I acted as both an investor and a medical adviser for the film Kajaki.