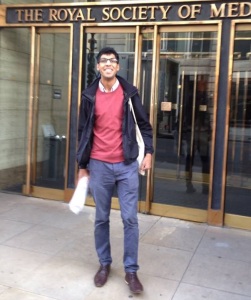 Modern medicine is an increasingly wary place for the digitally illiterate. With medical records turning electronic and computers springing up at the bedside, there is little hiding place for doctors who are averse to the machine. In an attempt to prepare students for 21st century clinical practice, Leicester Medical School recently became the first medical school in Britain to give teaching in e-consultations. This has made me reflect on one core skill at the heart of the modern day consultation: engaging with the computer.

Throughout medical school I saw a wide discrepancy in doctors’ digital abilities. While the single digit typer, forever searching for the next character, is a caricatured extreme, a lot of doctors do not find computers intuitive. Poor navigation of software and slow typing is a waste of doctors’ time, patience, and energy.

In addition, the computer—often aptly referred to as the “third member of the triadic consultation“—can dominate consultations and influence the encounter in a way that is not conducive to the doctor patient relationship. A doctor who spends more time engaged on the computer and typing notes will have to, by necessity, spent a shorter period with the patient—and this time is arguably of poorer quality.

An example that highlighted this difference was a GP placement I had early on in clinical training. I sat in with an FY2, who typed her notes and navigated the software with such speed that, as I told her, I estimated this gave her an extra 1.5 to two minutes with each patient (I also like to think that the panache with which she did this instilled confidence in the patient). Given the time pressures faced by GPs, this is a substantial time saving that many would cherish. Less focus on the “third member” allows more time on the patient; more time to explore concerns, and even chat and build relationships.

The truth is that the inability to type has become as absurd as the inability to write. As we seek to find efficiencies in healthcare provision, this is an area which has received insufficient attention. With electronic ward notes fast becoming a reality, the issue may be more pressing for hospital doctors than most are led to believe, however, for the time being, this is an issue particularly relevant for primary care. Good utilisation of the computer in consultations can be effectively addressed through learning outcome 2.4 of the Royal College of General Practitioners’ recently updated curriculum: “Demonstrate how to use the computer in the consultation while maintaining rapport with your patient.”

Solutions, as always, can be filtered through medical training. With the evolving role of computers in all clinical settings, couldn’t touch typing be viewed as a core competency for all graduating medical students? Communication skills are about far more than the face to face discussion. I focus here on typing, but this is merely the tip of the digital iceberg upon which doctors must grapple.

Embedding computers into routine use will require different skills for different clinical environments—from e-prescribing, to electronic bedside notes, and e-consultations. The internet is transforming medical practice and NHS doctors must keep pace with a changing world. In the midst of the biggest reforms in the history of the NHS, many, perhaps understandably, will view the issues raised here as small fry. This underestimates the importance of the “patient experience” as a driver of the public appetite for change.

The co-benefits of a workforce who are adept with computers should not be underestimated; many challenges lie ahead but improving clinical encounters is a good place to start.

Anand Bhopal is a graduate of Manchester Medical School and is currently a Masters candidate in politics, philosophy, and economics of health at University College London.