A year ago, the World Health Organization (WHO) issued revised and consolidated guidelines on the use of antiretroviral drugs for treating and preventing HIV infection. These guidelines included a key recommendation to initiate HIV treatment earlier (at 500 CD4 cells/mm³ or less) in order to ensure that people with HIV live longer, healthier lives, and to substantially reduce the risk of HIV transmission. If implemented globally, earlier HIV treatment could avert an additional 3m deaths, and prevent 3.5m new HIV infections by 2025.

Getting people on to treatment earlier is now a moral and scientific necessity. However, we know that many communities around the world are already facing tremendous challenges in accessing HIV services. Therefore, reaching a greater number of people who will need treatment even earlier is going to be complex, and will require wholehearted buy in and engagement from affected populations.

Communities are at the heart of an effective HIV prevention response. They need to be equal partners in planning, implementing, and evaluating HIV prevention strategies and programmes. They also need to continue to lead the HIV response—which includes advocating for high standards of prevention, treatment, and care for all—if we are to bring about an end to the pandemic.

The guidelines themselves mention that the meaningful involvement of people living with HIV (the so called GIPA principle) needs to be at the heart of any changes and decisions related to how HIV treatment is provided. For the 2013 WHO guidelines to really transform the lives of people living with HIV—together with their families and caregivers—communities need to take responsibility for making the guidelines a reality in their context wherever possible. But, at the same time, communities need to be empowered to do this.

With this in mind, my organisation the International HIV/AIDS Alliance, together with Stop AIDS Now and the Global Network of People Living with HIV (GNP+), have put together a guide. We want this to support communities and people living with HIV in the critical role that they have in helping to deliver more effective and equitable HIV programmes.

As well as focusing on some of the practicalities involved in initiating earlier ART—whether for adults and adolescents living with HIV, or for pregnant and breastfeeding women—our joint guide also highlights the importance of community action when working towards a goal of universal access.

Affected communities are well placed to expose service delivery failings, for example, or to advocate for the necessary changes to national and local HIV laws and policies, which might currently be impeding responses to HIV. Policies that prevent community health workers from dispensing HIV drugs, or laws that criminalise lesbian and gay communities, thereby making it difficult for those groups to access treatment and other health services, all fall under this bracket.

Indeed, many ethical concerns are highlighted by the WHO guidelines. For example, if we follow the recommendation to offer lifelong treatment to pregnant mothers, children, and people living with HIV in serodiscordant relationships, we’ll need to ensure that testing is voluntary, rather than coercive. Ethically, we also need to consider whether some populations with HIV should be prioritised over others.

Issues like these require consensus at national and local levels. Consequently, communities need to be involved in decisions about how to adapt the WHO guidelines to a local setting. It is only with their involvement that we can ensure the new recommendations are implemented within a rights based approach, which has quality services tailored to different people and based on their needs.

There is still much to do to strengthen and expand health systems, and link them with community based services. Next week in Melbourne, thousands of policy makers, people living with HIV, and other individuals committed to ending the pandemic will gather at the 20th International AIDS Conference to consider how to step up the pace of our response to HIV. We’ll be there to introduce our community guide as a new resource, which will support the meaningful engagement of affected communities in the decisions that ultimately shape their future.

Download the full set of modules that make up Driving the HIV response: A community guide to the WHO 2013 consolidated guidelines on the use of antiretroviral drugs for treating and preventing HIV infection. 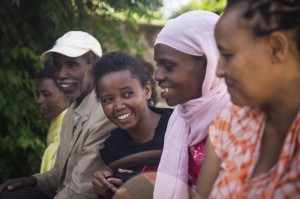 Gitau Mburu is a senior adviser on HIV and health systems at the International HIV/AIDS Alliance, which works to support community action on AIDS.