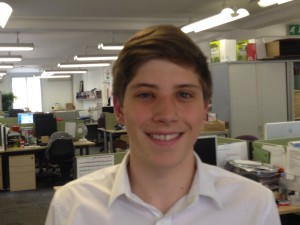 I arrived at the offices of The BMJ on Monday 7 July, expecting to spend the day at a desk reading scholarly articles, which I had little chance of making sense of. I am a sixth form student and spent a week at The BMJ on work experience. My previous encounter with work experience was at Dunn’s Bakery in Crouch End, north London, so I was already impressed as I walked through the reception area of BMA House, and through the courtyard with its fountain and gargoyles. The BMJ’s offices are pretty standard, but it was the world of medical journalism that I was plunged into that really surprised and engaged me.

I spent my first morning at a press briefing at the Science Media Centre on research into protein biomarkers in people with mild cognitive impairment. These can predict, with a high level of accuracy, whether someone with early symptoms of memory loss will develop Alzheimer’s disease within a year. Luckily Krishna Chinthapalli was there for The BMJ so that I did not have write up the research, although I found the subject interesting and the media buzz around the press conference exhilarating.

In the afternoon there was no letup. I was sent along to the European launch of the Global Tracheostomy Collaborative (GTC) at the Royal College of Surgeons, where I was lucky enough to hear Professor Stephen Hawking speak on what it is like to have a tracheotomy. GTC is a US company that launched stateside in April. It is made up of a multidisciplinary team of doctors, nurses, allied health professionals, and patients, and its chief aim is to improve the care of patients who need a tracheotomy. A report in June from the National Confidential Enquiry into Patient Outcome and Death (NCEPOD) found that in the UK many staff caring for patients who have had a tracheotomy are not appropriately trained and that patient care can be compromised.

GTC is starting its work in the UK at four sites in Manchester, where local “champions” are set to improve the safety and quality of care being provided. Hawking, who has motor neurone disease, explained how he was given a tracheotomy after food kept going down his windpipe. His throat was later reconstructed because the tracheotomy had thinned the wall of tissue between his trachea and larynx. The surgery allowed him to breathe on his own for five years, although, as his condition worsened he needed another tracheotomy.

The rest of my week at The BMJ involved helping out the editorial team where I could. I helped the web team adapt videos from their old format to one that works on the new website. I contributed to research for expanding the Student BMJ and attended another Science Media Centre press briefing—this time on the latest Home Office statistics on animals used in science. I admired the journalists’ skills—how quickly they deliver their stories and come up with headlines and straplines for the cover. On top of all that, during my week at The BMJ the office celebrated two successes: the launch of the new website, and Fiona Godlee’s Editor of the Year award at the prestigious PPA awards. Not a bad week for work experience.

Jack Johnson is a sixth form student who spent a week at The BMJ on work experience.