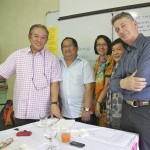 The occurrence of severe mental illness doubles in the months following a mass disaster (1). But few international agencies provide the specialist help needed at this time. And too often in resource poor countries, where disasters tend to occur, local mental health services are either non-existent or completely overwhelmed. So, although basic medical care, psychological first aid, and even counselling services are usually provided by international aid organisations, survivors suffering from psychosis, severe depression, and bipolar disorder are rarely catered for.

Two questions arise from this. Firstly, why does this surge of mental illness occur? Understanding this may guide the sort of intervention needed. And secondly, how should international medical relief agencies respond?

The increase of mental illness can be explained by a number of factors. In vulnerable individuals, severe mental illness can be triggered by stress. Illness relapse can result from the interruption of medication, or the destruction of normal caring arrangements. And finally, anxiety related to the disaster experience can become disabling, and develop into a severe post-traumatic stress disorder that needs specialist help.

How should medical agencies respond to this spike of severe mental illness in the post disaster period? Two guiding principles developed by the World Health Organisation (WHO) help with this. Firstly, the long established WHO recommendation that in resource poor countries services for people with severe mental illness should be integrated into primary care (2, 3).

Secondly, the more recent recommendation that, following disaster, one should “build back better” (4). For example by using aid money to support local clinicians to integrate mental health services into primary care, the disaster then becomes an opportunity to make services more accessible to more people.

In an assessment visit to the Typhoon affected regions, I found that the existing hard pressed mental health services were with few exceptions highly centralised. This meant that for many, the only hope of treatment involved a long journey. However, the Philippines have a remarkably vibrant system of devolved local government, and this supports a primary healthcare system that penetrates deep into the community.

Each municipality, consisting of 30 000-40 000 people, runs one or two rural health units staffed by a general practitioner together with nurses and midwives. They in turn support community workers based in village or Barangay health units, with each worker covering 20-30 households. From a mental health perspective, this is gold dust, since community workers have an intimate knowledge of who may be mentally ill in their patch. And wandering around the debris of the waterside communities in Tacloban, where some survivors had returned to squat in the remains of their homes, I heard many accounts of mentally ill people being supported by neighbours. This serves as a reminder that to identify those needing treatment, work needs to be done at a very local level.

One way of doing this would be for psychiatrists to train and supervise primary care staff within a municipality, and gradually scale up the number of municipalities covered, recruiting more psychiatrists as needed. However, there is a hitch in this grand scheme inspired by the WHO, which probably explains why it is rarely implemented in resource poor countries. It relies on skilled psychiatric expertise to develop and sustain it, and it’s hard to tempt the few psychiatrists around to work away from big cities, particularly since psychiatrists often rely on private practice to supplement their government income.

So, what should an international agency do? Three things stood out for me. Firstly, whatever outside intervention was agreed, it had to be developmental. In other words it had to outlive the emergency, be capable of being scaled up, and be consistent with the thinking of national government and psychiatric leaders. Secondly, it had to substantially improve access to mental healthcare, particularly for people living far from existing regional psychiatric hospital services. And finally, it had to be do-able and sustainable, minimising reliance on international staff and resources. And this meant finding a way of motivating local psychiatrists to participate.

In the end, the plan I recommended uses outside aid funds and a short burst of international training and project development expertise to create a model that would embed sessions of a local psychiatrist into clusters of the more remote municipalities affected by Typhoon Haiyan. These local psychiatrists would train, support, and supervise rural health unit staff using learning materials developed by the WHO to support the integration of mental health services into primary care (5).

Recently, the WHO published their Mental Health Action Plan for 2013-20 (6), and, one of the four key targets is the development of community mental health initiatives, something supported by the Philippines government in their mental health strategy (7).

My lasting memory of the assessment visit was not my conversations with numerous agencies and professionals. But the stories of the survivors (some of whom were health workers themselves), who experienced the triple horror of wind, rain, and a storm surge of up to 10 metres, followed by an aftermath of stinking debris and aching loss.

Nick Rose is an Oxford based psychiatrist. He was supported by CBM, an overseas disability charity, to visit the Philippines and assess the need for international support in providing specialist mental health services to survivors in the Typhoon affected areas.

IMC (International Medical Corps) is the only other major international aid organisation identified on this visit as planning or providing specialist mental health services in the area, although many international organisations are providing psychological first aid, debriefing (controversially), counselling, and psychosocial support.

Competing interests: I have read and understood the BMJ Group policy on declaration of interests and declare the following interests: employed by the international aid agency CBM during my assessment visit to the Philippines.

Photo 2: A mother and daughter beside a small red tinsel snowflake rescued from the rubble. The daughter had recently restarted medication for a severe mental illness, and is responding well. Her mother is relieved. (Consent obtained).