A year ago NHS commissioning was ripped up by its roots, divided up and then pushed back into the soil. Like the plants in my garden that get such rough treatment, commissioners are struggling to flourish. The NHS provider architecture has, so far, had more gentle treatment, and the journey towards “liberalisation,” that started in 2004 with the establishment of the first foundation trusts, continues.

The 2012 Health and Social Care Act, while not going so far as to propose the employee-led social enterprises suggested by the Liberating the NHS White Paper, has established the foundation trust model. However, the promises of increased autonomy are likely to have a hollow ring for many foundation trust chief executives. While the private income cap has been lifted, the regulatory burden appears to grow every day and the complexity of the new commissioning landscape makes it exceptionally hard for foundation trusts to plan and operate strategically. And the response to service problems such as A&E waits has been for the system (including ministers and Monitor) to re-double performance management efforts.

But a far greater issue is the question mark that now hangs over the ambition for all trusts to become foundation trusts, originally set to be achieved by 2008. In 2010, the coalition government’s White Paper set a new deadline for all NHS trusts (relaxed during the passage of the bill to “the vast majority” of trusts) to become foundation trusts by April 2014. Yet 40 per cent of NHS providers are still not foundation trusts, a position that has hardly shifted from three years ago when the figure was 45 per cent. In 2011, the National Audit Office identified 20 trusts “that face such substantial and long-standing problems that they are not viable in their current form” but assumed that the rest would continue along the path towards foundation trust status.

In a recent assessment of risk in the 99 NHS trusts that they oversee, the NHS Trust Development Authority identified concerns in 86 per cent of these trusts, with over half requiring further action. (see below) 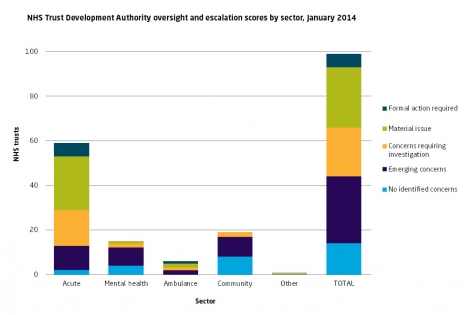 Applications for foundation trust status have all but dried up and any notion of a deadline for all NHS trusts to achieve this status has quietly dropped. In January, 15 of the Trust Development Authority trusts were in  Monitor’s pipeline of applicants, only two of which were actively being taken forward by Monitor—the remaining 13 were “paused” or “deferred.” David Flory said in his chief executive’s report “there remains a significant proportion of the NHS trust sector without a clear plan for sustainability.” In addition, the financial position of foundation trusts is weakening—39 were reporting a deficit at the end of December.

Alan Milburn has suggested that the current authorisation process should be “scrapped,” all trusts should be made foundation trusts and Monitor, rather than the Trust Development Authority, should take on the role of turning trusts around. But is this just moving the deckchairs on the Titanic? We don’t need more organisations with the label “foundation trust,” we need financial and clinical sustainability in the provider sector. Sadly, there are no obvious or easy solutions, but more radical options will need serious consideration and assessment. For example, moving to foundation economies with an accountable care organisation model, creating hospital chains or rejuvenating the ambition to diversify the provider market including the creation of social enterprise models.