How can a cardboard box be a symbol of equality and express the importance of children? Easily, if it’s filled with soft cotton clothes for newborns and contains a towel, a hairbrush, a toothbrush, nail clippers, and bath thermometer for the baby, as well as outdoor gear and a sleeping bag, a toy for cooling a baby’s aching gums when teething, and a colourful book for peaceful playtime. And the 70 cm long and 43 cm wide box itself is very important: it converts conveniently into the baby’s first own bed. All the material needed is included.

Since the 1940s the health of Finnish babies has increased remarkably.  The maternity package described above is considered to be one of the reasons why. In order to receive the package pregnant women had to—and still have to—take part in a health check-up before the end of the first trimester. This attaches women to the maternity clinic system, which over the years has influenced the improving figures of infant mortality.

The infant mortality rate in Finland was 2.3 per 1,000 live births in 2010—the lowest level in Europe together with Iceland, and one of the lowest in the world.

The Finnish maternity package is a success story, as BBC News creditably reported in the beginning of June. Mothers are proud of the package distributed by Kela (the social insurance institution of Finland). Many consider it a gift from society, as one mother said in Kela’s questionnaire: “Gorgeous, unique gift for families. My foreign husband can’t stop marvelling. He keeps telling his friends about it.” 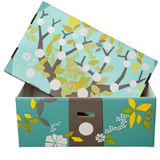 Sleeping in a cardboard box? Less than half of new mothers nowadays convert the box into a bed for the newborn. The practice was more common in the past. Babies don’t usually sleep surrounded by plain cardboard walls, but the box is covered with self-made or bought padding with bows and ruffles.

The box supports the idea of breastfeeding: no baby bottles or dummies are included. There’s no commercial material either. It focuses on the needs of the newborn and the parents.

The package follows the changes of time. Content is decided by a panel of less than ten people. They are from Kela, the Ministry of Social Affairs and Health, the National Institute of Health and Welfare, and the Mannerheim League for Child Welfare. Every three years Kela asks mothers for their opinions in a web questionnaire. Don’t change much, mothers generally answer, but they do have some suggestions like having a slightly different maternity package for baby number two or three, one that would not include items that do not wear out with the first child.

In 2010, a total of 61,161 children were born in Finland. Nevertheless, the maternity package is not a significant expense to Kela. In 2009 the price tag was 11 million euros, that is 0,001% of all the benefits that Kela paid. From a healthcare perspective the package most likely pays for itself as it ensures pre- and postnatal check-ups in maternity clinics.

The Finnish maternity package was a simple and clever invention that has endured over time. It is an idea that could and should be copied without restrictions. And one should not underestimate the psychological value for the mother: “We are thankful for the joy the box brings! It somehow makes the unborn baby a true member of the family during the first months of pregnancy. We always wait for the whole family to be home before we open the box.”

* Quotes are from Kela’s questionnaire to mothers who received a maternity package in 2010.

We have read and understood the BMJ Group policy on declaration of interests and we have no relevant interests to declare.

Image 2—The lid of the box works as a family tree ready to be filled with names and photos of baby’s closest adults. Photo credit: Kela.

Jaana Ahlblad is the news editor at the Finnish Medical Journal. She has two maternity package boxes filled with photographs in the attic.

Päivi Hietanen is the medical editor-in-chief at the Finnish Medical Journal. She has three maternity packages from 1954, 1980, and 1983 with baby clothes in the attic.