Last year a colleague phoned a patient named in a BMJ practice article. The patient had consented to her story being published (it was about to go live), but had wrongly thought her account was destined for publication in an obscure medical journal that would gather dust on library shelves.

My colleague was concerned that the patient might not realise that because bmj.com is well optimised for search engines, her name and details might appear high up in a list of Google results for years to come. It would also be seen by the BMJ’s 120 000 print subscribers, and those with access to the journal’s iPad app. Instead the woman opted to have her first person account anonymised, so she could not be identified.

This incident, described at a refresher course on patient consent for BMJ staff last week, illustrates how seriously the journal takes patient consent. Do doctors worry about getting a patient’s consent if they mention him/her in an article? Many do, of course, but the BMJ’s experience is that some need reminding of its importance, particularly since it could result in censure by the General Medical Council (GMC) and other medical regulatory bodies.

According to human rights and data protection legislation, patients have a right to confidentiality. Even if they are not named, they could still be identified. The fair thing to do is ask for consent.

The BMJ’s 1991 guidance was published at the same time as similar advice from the International Committee of Medical Journal Editors (ICMJE). Our experience since then has been that most patients grant consent, but if an author cannot get it (perhaps because a patient has moved away), their details can be anonymised (describing a 50 year old as middle aged, for example) by applying the following test: “whether a reader, knowing the underlying facts, would reasonably be able to identify the person being discussed.”

On some occasions we have anonymised an author’s details to protect patients further, usually when the issue being discussed is so overwhelmingly in the public interest that it merits wider discusssion. One example is a personal view article, published in November 2012, describes how it feels to withdraw feeding from newborn babies. The article was by a doctor practising outside the UK, but the location was not disclosed to protect the families involved.

Can doctors discuss a dead patient’s medical history? The 1988 Data Protection Act applies to the deceased, but the GMC says a doctor’s duty of confdentiality continues. Will writing about them distress family members? Does their medical history justify disclosure? Are relatives available to contact? We try to take all these into account before publication.

What about children? If the child is deemed old enough, they should be asked. If not, ask their parent or guardian. How about if a patient lacks capacity? As with children, the person acting for them has to consider their charge’s best interest. The chart below illustrates the process used by the BMJ to get consent, and what happens when it is refused or cannot be obtained. You can open it as a pdf at this link. 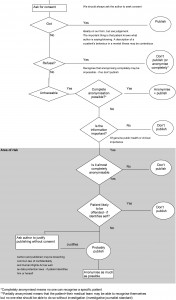 Consent also applies when images are used to illustrate an article.  If the ones chosen could potentially identify the patient, an author should get consent.  In 2001 a reader challenged the BMJ’s policy after we published an image in a news story of a nine year old boy with attention deficit hyperactivity disorder. What did the picture add to the article?  Should different standards apply to journalism? BMJ news editor Annabel Ferriman said in response to complaints that the boy’s story, including quotes from his mother and photographs of him, appeared widely in the US media. In effect the photograph was already in the public domain, she argued.

Richard Smith, then editor of the journal, described how news photographers usually do obtain consent, apologised if the picture caused offence, and said he would ask the journal’s ethics committee to review the BMJ’s policy. The image had been used in the mainstream media. Should the BMJ apply a higher standard?

The BMJ refresher course mentioned above was attended by both the journal’s medically trained staff and its journalists. Names make news, we are told at journalism school – we like to know addresses, ages, how many children, all of which add colour, detail, and, well, emotion to a story.  If we breached a patient’s confidentiality, we would not face the GMC, but the BMJ might be reported to the Press Complaints Commission.

Would we use that image today, given that it was already in the public domain?