My recent visit to the Buruli ulcer ward run by Médecins Sans Frontières in Akonolinga Hospital, Cameroon, was both inspiring and disturbing. The care provided was state of the art, but the visit led me to imagine an ideal world in which we could close these wards and change the face of this disease dramatically. So why would a doctor want to shut down hospital wards?

Buruli ulcer is an infection acquired mainly in rural, remote, and tropical parts of west and central Africa, most commonly in areas with limited access to healthcare. It affects mainly children and causes necrotising, progressive, lesions usually on the limbs, but occasionally affecting the face or trunk. Untreated they can progress to cause significant tissue destruction and may result in permanent deformity and disability, or even limb amputation. The frustrating thing to all involved is that the mode of transmission remains unclear—it is hard to prevent something when you don’t know how you get it in the first place. Although it is estimated to be the third most common mycobacterial infection worldwide it remains significantly under researched. 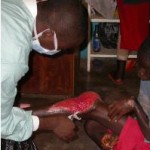 During my visit to the Médecins Sans Frontières Buruli ulcer ward in Cameroon it was wonderful to see the amazing care that the patients receive on a daily basis: antibiotics, state of the art dressings, physiotherapy to help prevent deformities, free food and medicines, and surgery when required. However I was confronted by the same feeling that I have when treating young children with HIV where, yes they do well on treatment, but if their mothers had received adequate antenatal care, they would not have HIV in the first place. Similarly now with Buruli ulcer—it is a shame to see the huge ulcers that require hospitalisation for dressings, often for at least a year and sometimes more, leaving patients separated from their families, communities, schools, and workplaces. It is sad to witness the terrible permanent limb deformities that result from the chronic scarring of destructive lesions that leave children unable to walk or use their hands, or see someone whose eye has been completely replaced by scar tissue. With the tools now available for diagnosis and treatment these are outcomes that are all preventable.

Recently with the great progress in many parts of Africa in early diagnosis and treatment of HIV, decentralised outpatient care is now provided to many patients before they become unwell with AIDS. Likewise for Buruli ulcer, if we can manage to detect, diagnose, and treat the infection early then the outcomes would be greatly improved. Early smaller lesions mean easier treatment, minimal dressings, more rapid healing, and no long term deformities. Patients would not need hospitalisation and could continue to work or go to school, medications could be taken at the local health centre, or even at home if the health centre was too far away. 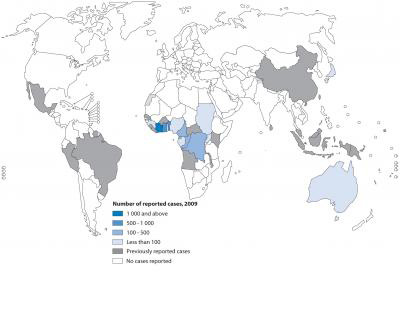 There are many challenges to making this a reality. First amongst them is convincing the community of the benefits of early diagnosis and treatment. This has been difficult previously when treatment required prolonged hospitalisation, included daily painful antibiotic injections, and often despite this, at the end of treatment patients were left with deformities. Yet we have faced these issues before with HIV. Until communities witnessed the incredible individual life saving benefits of antiretroviral treatment, many patients didn’t come for diagnosis and treatment, and communities were suspicious. Hence I would hope that the successful outcomes of patients with Buruli ulcer treated early and successfully will be the most powerful tool in achieving these goals. Other important issues include increasing community knowledge about Buruli ulcer and its treatment, breaking mystical ideas about how it is caused, and working with traditional practitioners to encourage them to refer patients with ulcers early, developing systems that allow the early detection of lesions and urgent referral for care in environments lacking in resources, and ensuring the availability of quality and effective oral antibiotics and surgery if required.

Early, decentralised care would be life changing for the many thousands of people affected by this terrible infection. The goals are clear, the path challenging, but the potential is inspiring and the outcome possible. Now let’s put our heads, resources, and commitment together and make it happen.

Daniel O’Brien is a specialist adviser with the Manson Unit, MSF-UK focusing on HIV/AIDS, tuberculosis and Buruli ulcer. He is also an infectious diseases specialist with Geelong and Royal Melbourne hospitals, Australia, and clinical associate professor with the University of Melbourne, Australia.