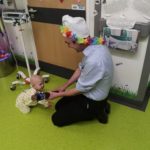 There’s been a flurry of interest about non-steroidal anti-inflammatory (NSAIDs) drugs like ibuprofen and the new coronavirus recently. The UK medicine’s safety authority have been clear that there is no good evidence of a link between severe COVID19 disease and NSAIDs, but that this isn’t a lot of evidence.

When there’s not much data of something bad happening, we are always left asking the question “Is it that SuperMed doesn’t cause the Bad Thing, or is it that we haven’t seen it yet?”

The more data we collect, the more sure we can be of the answer.

How we, clinicians, tend to make that decision can be obscure to normal people. In general, the stance to take is a balance between the likely truth of the claim, the possible severity of consequence of the Bad Thing, and the known benefit of SuperMed, and possible alternative treatments.

In this case, we know NSAIDs are good for pain. We know we’ve used quite a lot and not really seen a big worsening of COVID19 disease. We know that other claims of NSAIDs worsening disease have largely been related to confounding (that is, the co-occurrence of the Real Bad Causer and the medicine). And importantly, we know that Paracetamol is, quite often, a really good alternative to NSAIDs. So .. given all that .. we’re advising that if you need to give something like that, use paracetamol not an NSAID like ibuprofen.

(While it’s obvious to all us that Paracetamol and NSAIDs work at the pharmacological level in different ways, in communicating the message it could be worth saying this out loud, explaining there isn’t a risk that the same mechanism would be at play.)

For some kids, they will be taking regular NSAIDs anyway for treatment. Here the balance falls differently. The advice to them would be “Keep doing it”. The worry of sending ‘contradictory’ messages can be approached by explaining how the situations differ, so the weights of the considered variables change, and so in that instance the benefits there are going to outweigh the harms.

Evidence based approaches can still apply in pandemics, and keeping our explanation clear might help to minimise the distress of uncertainty.