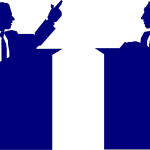 Back in the mists of pre-clinical training, I used to believe that disease states arose through disordered bodies. That illness was a disturbance of anatomy and physiology, and that by understanding the basics of normal, we could derive the pathological, and so predict the disorder and define the therapy. Then I learned of the influence of the mind, and how our way of thinking could lead to altered interpretations and that disease states were a function of how we understood the world, our bodies, to be. I later discovered that it was society that created ill health, through inequality, housing, and the pursuit of profit, literally creating illnesses because a drug could then be sold. I bought the idea that by understanding good clinical research and applying it to our patients, we’d make sure we got the best outcomes. Until the day arrived when the I realised that the trousers tailored for the average sized school child fit the reception class and school-leavers equally poorly, and there had to be a better way. I finally crumpled into a position of realising I’d probably never know how anything actually caused or cured anything, but that each world view might be helpful at different times.

And so, despite the placement of pathological reasoning and bench science at the foot of the pyramids of evidence (… also defunct …) I think there are some times when they can be useful. For some conditions, there is a remarkably clear understanding of how things work, and how they can be fixed. So if we show that the distance between dural sac and skin in 18mm on ultrasound, I’m not going to need a large randomised trial to tell me the new 4mm needles won’t work.

Evidence-based medicine is a framework of thinking, to allow the development of ideas and the defence of a thesis, aimed at improving the wellbeing of the people we work with and for. Sometimes even pathology can help.