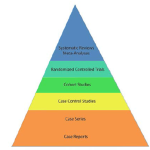 The idea of the pyramid of evidence – where a systematic review, or even better, a meta-analysis, trumps all below it – is something that’s passed into mythical status in evidence based practice. Actually, mythical is probably a good way of thinking about it. It’s not real, not really real. But it’s not quite truthless either. The levels of evidence, like so many other ways of understanding the world, are useful to give us a skeleton, but the meat on the skeleton is what makes it more interesting, fun & cuddly.

Images are powerful though, so when the latest issue of the Evidence Based Health Care Newsletter* came out and showed a dramatic re-imagining of the pyramid – I was hooked 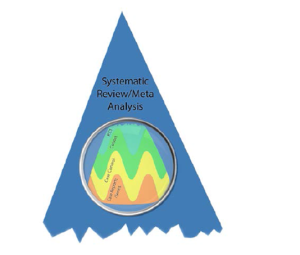 Mohammad Hassan Murad and colleagues take the pyramid, make the strata wiggly, and use the systematic review as a lens, not a layer on its own.

What this does is visualise the concept that some (but few) cohort studies will be better than RCTs, and that some (very very few) case-control studies may be better than RCTs. It’s a way of making the GRADE system spring into life – and I hope it allows the readers of this blog to purvey a new message about evidence and appreciating it.

* yes, you may find this as a guest publication on ‘Have I Got News For You‘ at some point in the future