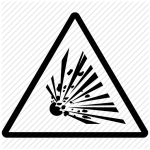 Well, I thought that was a better title than ‘Volatility’ which, to be fair, is closer to what this meandering post is all about.

When we’re struggling our way through medicine, we have to face all sorts of uncertainties. Some of these are the frank face of ignorance (we just don’t know something), some of them are about the degree of chance that plays into our knowledge, some around the edges where we decide which side of an imaginary line things play, and on top of all these, we have situations where Stuff Changes. Not that we don’t currently know where things are going to end up – for example, that we don’t have the diagnosis yet because we haven’t worked it out – but that it actually alters as we go through time.

These are, for want of a better description, ‘volatile’ situations. We may begin with a premature baby who has periventricular flare, and we may end with a Member of Parliament with a string of illicit liaisons. The ultrasound wielding neonatologist cannot be expected to predict a life course the progresses that way; there are too many things that happen, too many things which were not know because they were mere possibility, when the child’s scalp was splattered with conductive jelly. We may estimate some aspect of the life course (for example, the proportion of a population with flare who will have a degree of spasticity) but not others.

If you believe in such situations, that also reflects a fundamental belief in your understanding of the world. You reject universal determinism. Others may not, and believe in a calculable “fate”.

It might be worth sometimes explaining, when you’re discussing uncertainties, that there is a fundamental inability in knowing sometimes. And sometimes, it’s that we don’t have the tools to tell, or enough data to be sure, and being clear about the foggy unsureness that you are discussing.